‘Ashley will never get married. Her father will never walk her up the aisle’

Aoife Beary, who suffered severe injuries when a balcony collapsed in Berkeley, and her mother Angela testify to the Assembly Appropriations Committee to pass Senate Bill 465 in Sacramento, California. 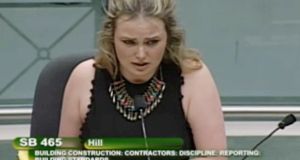 Aoife Beary, who suffered severe injuries in when a balcony collapsed in Berkeley, testifying to the Assembly Appropriations Committee to pass Senate Bill 465, in Sacramento, California.

The mothers of two students who fell when a balcony collapsed in Berkeley, San Francisco, last year have made an emotional appeal for the passage of legislation that may prevent another similar tragedy.

Together with testimony from Aoife Beary, whose 21st birthday party had been taking place on the night six students were killed, they urged California lawmakers to pass Senate Bill 465, seeking greater transparency of the construction industry.

Wednesday’s hearing heard from Aoife’s mother Angela, as well as Jackie Donohoe, mother of deceased Ashley Donohoe, both of whom said their families’ lives had been irrevocably changed by the events of June 16th, 2015.

Ms Donohoe said she never would have dreamed of telling her daughter “don’t walk out on a balcony in the United States of America”.

Ashley (22) was at the party with her cousin Olivia Burke (21) who also died when the fourth floor balcony separated from the apartment block.

“Her father did carry her up the aisle; he carried her coffin up the aisle and her beloved friend and cousin Olivia did follow her.”

In the aftermath of the Berkeley incident, it emerged the builder of the Library Gardens complex had paid $26.6 million (€24 million) in settlements relating to other cases of building defects.

The proposed Bill must be voted on by the committee by tomorrow if it is to progress to a full assembly hearing at the end of the month.

It would require the Contractors State License Board to report to the legislature by January 2018 as to whether the public would be better protected if the state compels contractors to report judgments, arbitration awards and settlement payments for construction defects.

Angela Beary, speaking for the affected families in Ireland who had undergone “incredible grief”, also called for the Bill to be passed.

She recalled the girls being “full of excitement” as they sat around her kitchen table making their bookings for Library Gardens. They left Dublin Airport, she said, “full of smiles and laughter and excitement. Many of them never came home.”

She said anything less than passing the Bill“is failing us all and it’s failing those who have lost their lives and those who continue to live with the injuries and the horror of what happened”.

Ms Donohoe has also created an online petition in support of Senate Bill 465, California State House: Support SB 465, to prevent balcony collapses like the one that killed my daughter in 2015.

The petition is supported by the Irish Consulate.