Bannon asked to testify on Russia to House intelligence committee 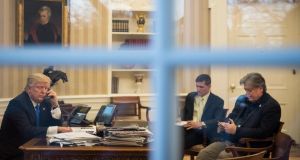 Both men were sent letters this week by the House intelligence committee asking them to testify in early January, according to an official familiar with the panel’s schedule.

The committee hasn’t yet received a response from either Bannon or Lewandowski. The invitation, which didn’t come in the form of a subpoena compelling them to testify, was for a “voluntary interview” in the committee’s offices, which means it would be held behind closed doors, the official said.

The letter doesn’t lay out specific reasons why the committee wants to interview them, or the questions the panel wants to pose, but it makes clear that the interviews are part of the Russia investigation.

Bannon, who worked as Trump’s top strategist during the campaign and for several months in the White House, hasn’t been publicly accused of any wrongdoing. He was a key member of Trump’s team when the president fired his first national security adviser, Michael Flynn, and the incumbent FBI director, James Comey.

During the campaign Bannon was also a liaison to its data-analytics firm, Cambridge Analytica. Alexander Nix, the chief executive of Cambridge Analytica, met with the House intelligence probe earlier this month. Nix faced questions about whether he sought material from the WikiLeaks publisher Julian Assange that was stolen from computers of the Democratic National Committee and John Podesta, who managed Hillary Clinton’s presidential campaign as the Democratic Party candidate.

Lewandowski was fired as campaign manager on June 20th, 2016, and replaced by Paul Manafort, who has been indicted on money-laundering charges by Robert Mueller, the special counsel appointed by the FBI after Comey was fired.

Before Lewandowski left he was among among several senior Trump campaign officials who received communications from the foreign-policy adviser George Papadopoulos about his contacts with the Russian government, according to published news accounts.

The Washington Post reported last month that court filings show Papadopoulos wrote to Lewandowski several times to let him know that the Russians were interested in forging a relationship with the campaign.

The newspaper said that included one message in May 2016 in which Papadopoulos forwarded to Lewandowski an offer of “co-operation” from a Russian with links to the ministry of foreign affairs. “Is this something we want to move forward with?” he asked. There was no indication of how Lewandowski responded, wrote the Post.

Lewandowski has said publicly he doesn’t recall whether he received emails from Papadopoulos, who pleaded guilty in early October to lying to federal agents about his outreach to Russia.– Bloomberg