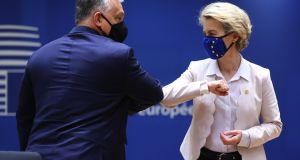 Hungarian and Polish leaders have declared victory in a dispute over tying European Union funds to the rule of law, even as some of their critics insisted that the new link would help the bloc punish states that flout democratic norms.

Others were less enamoured of the deal to unblock the EU’s €1.85 trillion budget and recovery package, which was denounced by a member of Poland’s ruling coalition as a surrender of sovereignty to Brussels, and by civil society groups as a capitulation to the nationalist governments in Warsaw and Budapest.

Poland and Hungary lifted their veto on the financial package after other member states agreed that the new rule-of-law mechanism would not be used until the European Court of Justice (ECJ) ruled it was legal, which could take years.

“We won because in hard times, during the epidemic and the economic crisis, there’s no time for ideological or political debates,” said Hungarian prime minister Viktor Orbán.

“We have fought for our rights, rejected blackmail and everything that isn’t acceptable for our nations,” he added, having claimed, inaccurately, that the new terms could be used to force Hungary and Poland to take in refugees.

The EU accuses both countries’ governments of exerting undue influence over the judiciary and media, while they say Brussels promotes liberal values that they reject under the guise of “defending democracy”.

Polish premier Mateusz Morawiecki said the deal was a “double victory” because “the EU budget may enter into force... and the conditionality mechanism has been limited by very precise criteria.”

His claim was challenged by Polish justice minister Zbigniew Ziobro, who said a non-binding political declaration on how the new mechanism will work would not stop the EU “interfering in the activities of the [Polish] president, parliament, government and even local governments in almost every field”.

“All the threats recently mentioned by the leaders of the United Right [ruling coalition] have become real, as the regulation enters into force without any changes to the contested text. The decision to adopt the regulation in the budget package without legally binding safeguards is a mistake,” he said.

Critics of the deal said Poland and Hungary could potentially delay application of the new rules for years by challenging them at the ECJ.

“This is their right,” said European Commission vice-president Vera Jourová. “I expect the proceeding to go fast... we are talking about months rather than years.”

George Soros, the Budapest-born billionaire whose funding of liberal causes has made him Mr Orbán’s nemesis, described the compromise brokered by German chancellor Angela Merkel as “the worst of all possible worlds”.

“Threatening to torpedo the EU’s finances by vetoing its budget was a desperate gamble on Orbán’s part. But it was a bluff that should have been called,” he said. “Unfortunately, Merkel has, it appears, caved in to Hungarian and Polish extortion.”