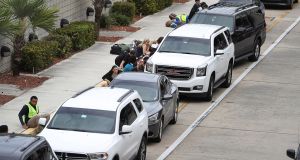 People take cover behind cars outside Terminal 2 of Fort Lauderdale-Hollywood International airport after a shooting near the baggage claim on January 6, 2017 in Fort Lauderdale, Florida. Photograph: Joe Raedle/Getty Images 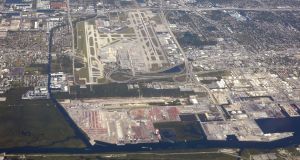 Aerial view of the Fort Lauderdale-Hollywood airport in Florida. On its official Twitter account, airport officials said there was an “ongoing incident” in the Terminal 2 baggage claim area. They did not elaborate. File photograph: Daniel Slim/AFP/Getty Images 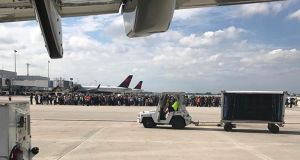 Passengers gather on the tarmac of the Fort Lauderdale-Hollywood airport in Florida after a gunman opened fire on January 6th, 2017. Photograph: Taylor Elenburg/AFP/Getty Images 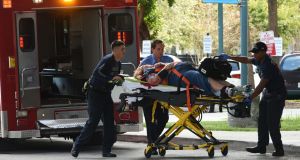 An injured woman is taken into Broward Health Trauma Center in Fort Lauderdale, Florida, after a shooting at the Fort Lauderdale-Hollywood International Airport on Friday. Photograph: Taimy Alvarez/South Florida Sun-Sentinel via AP 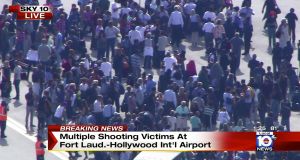 In this still image from video provided by NBC TV Local10, people stand on the tarmac after shots were fired at the international airport in Fort Lauderdale, Florida, on Friday. Screengrab: NBC TV Local10 via AP 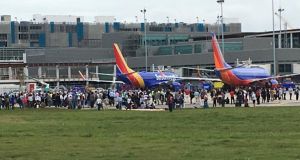 Travellers on the tarmac outside a terminal after it was evacuated after a mass shooting at Fort Lauderdale-Hollywood International Airport in Florida, US, January 6th, 2017. Photograph: Andrew Innerarity/Reuters

A gunman has opened fire in the baggage claim area at the Fort Lauderdale airport, killing five people and wounding eight before being taken into custody, officials said.

The attack sent panicked passengers running out of the terminal and on to the tarmac.

Authorities gave no details on a possible motive for the shooting inside terminal 2, which serves Delta Air Lines and Air Canada.

“People started kind of screaming and trying to get out of any door they could or hide under the chairs,” a witness, Mark Lea, told MSNBC. “He just kind of continued coming in, just randomly shooting at people, no rhyme or reason to it.”

Mr Lea said the gunman said nothing as he “went up and down the carousels of the baggage claim, shooting through luggage to get at people that were hiding”.

He had a handgun and went through about three magazines of ammunition, Mr Lea said.

The gunman threw down his weapon and lay spreadeagled on the ground until he was taken into custody, Mr Lea said.

A passenger said he heard the first gunshots as he picked up his luggage from a baggage carousel.

John Schilcher told Fox News the person next to him fell to the ground on Friday. He said other people started falling, and he then dropped to the ground with his wife and mother-in-law. Mr Schilcher said “the firing just went on and on”.

He said the shooter emptied his weapon and reloaded during an eerily quiet lull in the gunfire. Mr Schilcher said he did not assume it was safe until he saw a police officer standing over him.

He said he remained on the ground and was told not to move as authorities investigated unconfirmed reports of a second shooting.

Witness Judah Fernandez told CNN he heard what he believes were the first shots, re-entered the airport, but then rushed out again shortly later to the tarmac. He said: “Everyone’s running now.” He said both security officials and passengers were running.

Senator Bill Nelson of Florida claimed the gunman was carrying military ID in the name of “Esteban Santiago”, but that it was unclear whether it was his.

“We don’t know a motive at this point,” Mr Nelson said. “This could well be someone who is mentally deranged, or in fact it could be someone who had a much more sinister motive that we have to worry about every day, and that is terrorism. We can’t conclude that.”

The airport suspended operations as law enforcement authorities rushed to the scene and emergency medical workers treated at least one bleeding victim on the tarmac.

President Barack Obama was briefed on the shooting by his Homeland Security adviser at the White House.

President-elect Donald Trump said he was monitoring the situation and that he had spoken with Mr Scott.

Video posted on Instagram appeared to show several people wounded in the baggage claim area of the terminal. One person appeared to be lying in a pool of blood with a head wound.

Paramedics could be seen treating a bleeding victim outside the airport. Hundreds of people stood on the tarmac as an ambulance drove by.

Broward County mayor Barbara Sharief told CNN authorities that a lone shooter was responsible for the attack and had been taken into custody.

Flights already in the air and headed for the airport were delayed or diverted, and those that had yet to take off for Fort Lauderdale were held on the ground.