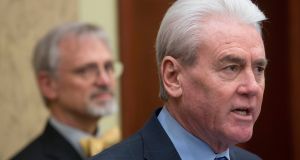 Terry O’Sullivan, president of the Labourers’ International Union of North America (LiUNA), speaks during a news conference with Earl Blumenauer, a Democrat from Oregon (l), in Washington, DC, US. Photograph: Andrew Harrer/Bloomberg via Getty Images

There were moments when it felt like Irish-American trade union leader Terry O’Sullivan might not just commemorate the role of US organised labour in the 1916 Rising but re-enact the insurrection itself.

O’Sullivan, general president of the Labourers’ International Union of North America (LIUNA), delivered a fierce, barnstorming speech at an event on Thursday night honouring the contribution of the American trade union movement to the Easter Rising, one of many 1916 centenary events to be held in the US over the coming months.

The event at a Washington hotel was hosted by the Irish American Democrats, a group backing Hillary Clinton in November’s election.

In the presence of Irish Ambassador Anne Anderson and Norman Houston, director of the Northern Ireland Bureau, O’Sullivan didn’t hold back in talking about the strong ties between Ireland and the US.

“A century ago the people of Ireland were able to count on the American labour movement to support them. Today, they can count on us again, to support them, to work with them, to stand with them and to fight alongside them for a free and united Ireland,” he said.

O’Sullivan, a man proud of his Co Kerry ancestry, opened up on the US Republican Party which, he claimed, were “not just out to hurt us but to kill us”, describing them as “anti-union, anti-worker bastards”.

“Instead of teaching people to fish, these SOBs are busy stealing all the fishing rods,” he said, to a roomful of raised eyebrows.

Mr O’Sullivan declared that when “dignity is under fire, when we are fighting for our jobs, our families and our lives, there can be no movement too militant and there is no movement too radical”.

With several notable diplomatically motivated exceptions, the labour leader had the crowd cheering and standing in applause.

One member of the audience, Jim Hoffa, general president of the International Brother of Teamsters – son of the famous union leader who disappeared in 1975 – told The Irish Times that the Irish were the “backbone” and “the inspiration” for the modern US labour movement.

While the US Clan-na-Gael network, developed from the Fenians, was crucial to the planning of the Easter Rising – an estimated $100,000 was sent back between 1907 and 1916 – the role of US unions is not so clear.

Labour leader-turned-revolutionary James Connolly was active in the radical Industrial Workers of the World during his time in the US from 1903 until 1910, but this was a union that many Irish-American trade unions shunned or feared, according to Limerick historian Brian Hanley.

“While many of the [1916] activists were workers and members of trade unions, I would say it is a stretch to claim the unions themselves were central to the organisation of 1916,” said Hanley.

“If there happens to be another election that Sinn Féin gains even more votes . . . it is kind of a tenuous situation now,” he said, after pointing out that he was always careful talking about another country’s policies.

O’Sullivan is leading one of the largest delegations of American trade union leaders to Ireland – about 120 people – on a trip next week. They will meet their Irish trade union counterparts, march in Belfast, and attend Government and Sinn Féin events commemorating the Rising.

Asked whether Sinn Féin would benefit from sitting out the current political uncertainty back in Ireland, Mr O’Sullivan said: “I would never inject myself in Gerry Adams’s strategy.”

Fighting spirit has its limits, at least publicly, when it comes to strategy.