‘All clear ’ given after Capitol Hill shooting incident 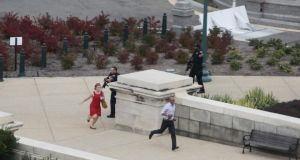 Police close in on the US Capitol as people run for cover after reports of a shooting. The US Capitol and the White House were placed on lockdown. Photograph: Alex Wong/Getty Images 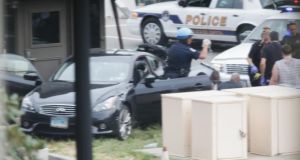 Police attend an injured person on grass near the US Capitol. The US Capitol and the White House were placed on lockdown after shots were heard. Photograph: Alex Wong/Getty Images 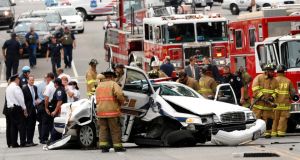 Rescue personnel stand around a smashed US Capitol Police car following a shooting near the U.S. Capitol in Washington. The Capitol was in lockdown on Thursday after gunshots were fired outside the building. Photograph: Kevin Lamarque/Reuters

The US Capitol was briefly locked down today after gunshots were fired outside the building following a car chase across central Washington which ended with the woman who drove the car being shot, officials said.

One US official said the woman was killed but this could not be confirmed immediately and a police official said he did not know the condition of the suspect.

A US official said there was no apparent connection to terrorism and the police official said it appeared to be an isolated incident.

The shooting rattled the US capital three weeks after a government contractor opened fire at the Washington Navy Yard, about 1.5 miles (2.4 km) from the Capitol, killing 12 people and wounding three others before he was shot to death by police.

The incident began near the White House and ended near the US Capitol, where the US House of Representatives and Senate were in session. Lawmakers were trying to find a solution to a budget impasse that partially shut down the US government this week.

Officials said a vehicle struck a security barrier at 15th and Pennsylvania Avenue, near the White House. Police chased the vehicle for about 1 1/2 miles to 2nd Street and Constitution Avenue, near the Capitol, where the shots were fired.

“I was just eating a hot dog over here and I heard about four or five gunshots, and then a swarm of police cars came in wailing their sirens,” said Whit Dabney (13) who was visiting from Louisville, Kentucky, and heard the shots a couple of blocks away.

“They ran all the red lights. It was a very dangerous situation,” Mr Gilbert said.

He said the car stopped outside the Capitol and he heard gunshots. One police car hit a bollard and was damaged.

An injured policeman was taken from the shooting scene in a Medevac helicopter, police said.

“He appears to be conscious and breathing but we’re following up,” Capitol Police Chief Kim Dine said. “As far as we know, no officer has been shot.”

Chief Dine said he believed there was a child in the car with the suspect.

Just before Capitol Police sealed off the Capitol building, the Senate and House were in session. On the Senate floor, Senator John McCain of Arizona was urging that President Barack Obama and a bipartisan group of senators launch negotiations to break the deadlock over government funding and a debt limit increase.

The House had just passed a bill to fund the National Guard and reservists who are not on active duty during the shutdown.

The Capitol police, who were deemed “essential” staff, were at work despite the shutdown but they are not being paid.

“I was walking in the direction of the gunshots, so I stopped and I noticed Senator Bernie Sanders of Vermont was headed my way. We both took cover behind an SUV,” Wicker said. “And then police officers came and told us to get down.”

The lockdown order at the Capitol was called off after about an hour and security along Independence Avenue was eased shortly before 3 p.m. (1900 GMT). Tourists were allowed back onto the Capitol grounds.

Mr Obama was briefed on the incident, a White House official said, providing no further details.

In 1998, a gunman burst through a security checkpoint at the Capitol and killed two Capitol Police officers in an exchange of fire that sent tourists and other bystanders diving for cover. The suspect, Russell Eugene Weston Jr, was not charged with a crime because of apparent mental instability.