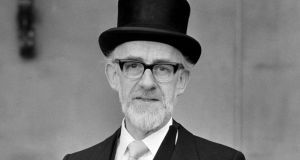 Yes Minister was a broadcasting triumph that not only intrigued and attracted the civil service caste and politicians from Margaret Thatcher downwards, but has echoed around the world – with sales to 84 countries – and reverberated in spin-off books and a successful West End adaptation of Yes, Prime Minister.

The idea of a hapless politician, constantly thwarted, outwitted and occasionally saved by wilier, more devious, civil servants struck a resonant chord among viewers in democracies from Europe to Australia and the US, and taught viewers valuable, if cynical, lessons about the shortcomings of governments.

While it did not make Jay’s fortune – he and his co-author Jonathan Lynn were paid £1,200 an episode between them – it did establish him as an occasional media commentator of trenchant rightwing views on Westminster and Whitehall politics forever afterwards.

The series had its genesis in Jay’s much earlier experience as a young TV producer on the groundbreaking BBC nightly news programme Tonight in the late 50s and early 60s. The live broadcasts were among the first to interview politicians robustly and to report the news occasionally irreverently.

What it taught Jay was the conceit and vulnerability of ministers when viewed at close quarters. “You saw a lot of politicians were just puppets,” he told The Irish Times in 2013. “I realised these compromises, driven by conflicts between ministers and permanent secretaries, had huge comic potential.”

Nevertheless it took nearly 20 years for the programme to get off the ground, the 38 episodes of the two series between 1979 and 1988 coinciding with the Thatcher government.

Its success was not only down to the crunchingly authentic-seeming verbal jousts between the main characters but to the casting of Paul Eddington as Jim Hacker, the harassed and permanently alarmed minister at the fictional Ministry for Administrative Affairs, and Nigel Hawthorne as his feline permanent secretary Sir Humphrey Appleby, refereed by Derek Fowlds as the private secretary Bernard Woolley.

Eddington, seeing where the laughs were, had originally wanted to play Sir Humphrey, but was persuaded of the comic potential of the minister. Nonetheless, he then watched Hawthorne win four Baftas without winning any himself as the series progressed.

The writers themselves were not even invited to the Bafta ceremonies at which the programmes eventually won a total of seven awards. Their partnership was successful despite their different political allegiances: Jay, the rightwing free marketer, researched and supplied the plot lines and Lynn, the left-leaning actor, provided the jokes and dialogue.

The scripts were closely based on detailed research and conversations with former political advisers and ministers, including Marcia Williams and Bernard Donoughue, who had been members of Harold Wilson’s staff at 10 Downing Street, and the scenarios were sometimes derived from real incidents.

The undatedness of the plot lines arose because the original scripts were written well in advance of transmission - some actually during the era of the Callaghan government in the late 70s - so they could not take their topicality from current events later. “We often had to write months ahead of transmission … it means you can’t put in little topical jokes that will be funny tomorrow but meaningless months later,” Jay said. “Our jokes were about permanent things rather than temporary things and they stayed relevant.”

Thatcher became a fan, identifying so closely with the series that she even insisted on writing a sketch for the characters in 1984 before a National Viewers’ and Listeners’ Association award ceremony.

Lynn, Hawthorne and Eddington were reluctant participants, not least because the prime minister’s sense of humour was notoriously non-existent, but also because they did not wish to be associated with a partisan event, since the whole point was that Hacker’s politics were never identified. Jay, however, was happy to indulge the prime minister: “I was a great supporter of Margaret Thatcher: she was very nice about it. It gave us lots of publicity,” he said.

Jay and Lynn had met at a company called Video Arts that Jay had formed with John Cleese in 1972, after he had left the BBC. It was set up to make training documentaries about business management. The humorous approach, tackling issues such as how not to interview candidates and how not to sell things – described by Lynn as the comedy of cock-up – was wildly successful, and Lynn, who had been in the Cambridge Footlights with Cleese, was recommended to Jay when Cleese left to write Fawlty Towers.

The company, which started with £4,000, was eventually sold for £44m in 1989. By then Yes, Prime Minister – the sequel series in which Hacker fortuitously reaches Downing Street – had come to an end in the UK, and Lynn was leaving for Hollywood to become a film director. The two teamed up again more than 20 years later to write a stage play based on the same characters, though with new actors, since Eddington and Hawthorne had both died, and Fowlds was too old to return as Bernard.

The stage Yes, Prime Minister came to the West End in 2010 and also toured the US. The afterlife continued in a spin-off television series featuring the same characters, broadcast by the Gold satellite channel

Born in London, Antony was the son of Ernest Jay, a character actor who appeared in a number of British films in the 30s and 40s, and his wife, Catherine Hay, also an actor. He was educated on a scholarship at St Paul’s school, west London, and studied classics and comparative philology at Magdalene College, Cambridge.

He claimed to have spent his time at university playing bridge and cricket and writing for university magazines before knuckling down to study and being awarded a first-class degree.

After national service as a second lieutenant in the Royal Signals , in 1955 he joined the BBC and was in at the start of the Tonight programme as a producer. Broadcast live, with limited technical resources, the show centred on its unflappable presenter Cliff Michelmore , who could be relied upon to cope with films breaking down and guests held up in traffic. But it was also a training ground not only for onscreen journalists but also for producers and directors such as Jay, Alasdair Milne and Michael Peacock. Jay became the programme’s editor (1962-63), and left BBC TV as head of talks features (1963-64) to become a freelance writer and producer.

Following the sale of Video Arts and the success of the Yes Minister series, Jay retired to Somerset, from where he produced a stream of works on management techniques, spin-off books including Jim Hacker’s diaries and How to Beat Sir Humphrey: Every Citizen’s Guide to Fighting Officialdom (1997) and even a handbook, Not in Our Back Yard: How to Run a Protest Campaign and Save the Neighbourhood (2005), about organising community resistance to planning proposals for the likes of wind farms and road schemes.

There was also a regular stream of articles, many attacking his old employers at the BBC, for receptive papers such as the Daily Mail and Telegraph. He insisted that the corporation was institutionally leftwing, and in 2011 he called for it to be reduced to Radio 4 and BBC1: “What more do we need? The case for a drastic slimming-down gets stronger every day.”

Jay was knighted in 1988, at about the time Yes, Prime Minister ended, though apparently for his much earlier work as a producer of the Queen’s Christmas broadcasts . His final collaboration with Lynn came in the Guardian earlier this month, with Sir Humphrey welcoming a new Brexit minister