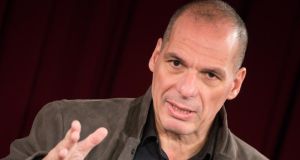 Former Greek finance minister Yanis Varoufakis has warned that Britain’s exit from the European Union would speed up the disintegration of the union.

“The UK is going to be sucked into a vortex of depression. It would be a grave error for both sides” he said on RTÉ’s Sean O’Rourke show.

“We have a duty to stick together. I would advise the British to vote to fight Brussels from within.”

Mr Varoufakis set out the case for Britain staying in the EU in an article in The Guardian this week.

Despite Greece’s rough treatment at the hands of European leaders during bailout negotiations, he said member states should not assume the EU “is something constant ‘out there’ that you may or may not want to be part of”.

“If one insists that even small countries can retain their sovereignty, as I have done, does this mean Brexit is the obvious course? My answer is an emphatic ‘No!’

“Here is why: if Britain and Greece were not already in the EU, they should most certainly stay out. But, once inside, it is crucial to consider the consequences of a decision to leave,” writes Mr Varoufakis.

“Whether we like it or not, the European Union is our environment – and it has become a terribly unstable environment, which will disintegrate even if a small, depressed country like Greece leaves, let alone a major economy like Britain.

“Just like in the early 1930s, Britain and Greece cannot escape Europe by building a mental or legislative wall behind which to hide. Either we band together to democratise – or we suffer the consequences of a pan-European nightmare that no border can keep out.”

Britain is holding a referendum on whether it remains or exits from the European Union on June 23rd.