Who were the Celts? It’s complicated

Celtic refers to a distinctive history that sets certain modern nations apart, according to a British Museum exhibition 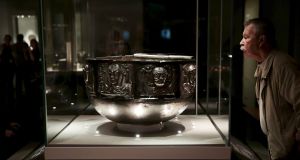 The Gundestrup cauldron displayed in the “Celts: art and identity” exhibition at the British Museum in London. Photograph: Suzanne Plunkett/Reuters

The Celtic nations of these islands have seldom been more assertive in recent centuries than they are today, as Scotland toys with independence, Wales seeks more devolved powers and a confident, independent Ireland meets the United Kingdom as an equal partner in the European Union.

Celtic culture is buoyant too, with a growing interest in the indigenous languages and music of Ireland, Scotland and Wales.

Even Cornish, a language pronounced dead in the 19th century, is showing signs of life, and BBC Cornwall now broadcasts a weekly news bulletin in Cornish.

But who were the Celts? And what have they really got to do with us?

The answer, according to the exhibition Celts: art and identity at the British Museum in London until January 31th, is complicated.

Julia Farley, the exhibition’s lead curator, says that until very recently the answer would have been straightforward. The Celts were a people who were found in Iron Age Europe about 2,500 years ago, and who migrated westwards to Ireland and Scotland, where their descendants are found today.

“Now that archaeologists and linguists and even geneticists have gone back and looked again at the actual evidence, we’ve realised that a lot of that is based on the kind of questions people were asking 400 years ago and what they were expecting to find.

“And really now I would answer, if you were to say to me who were the Celts, that this is a word that has been redefined probably in the past 300 years and it’s been used in two different ways.”

Some 2,500 years ago the ancient Greeks and the Romans used the name keltoi or Celtae to refer to their barbarian neighbours to the north and west in continental Europe. They were quite disparate peoples but they shared a common art style and spoke related languages.

But for at least 1,000 years after that the name was not used at all, and nobody called themselves Celts or Celtic.

From about 1700, after the word Celtic was rediscovered in classical texts, it was applied for the first time to the distinctive culture, history, traditions, language of the modern Celtic nations – Ireland, Scotland, Wales, Cornwall Brittany and the Isle of Man.

Dr Farley argues that, although the word Celtic has been used to refer to different peoples at different times, it does apply to real, distinctive identities today.

“The fact that they are given the name Celtic rather than a different name is in some ways a little quirk of history but there are shared dimensions and aspects between the languages of Wales, Scotland and Ireland.

“Those are very real, and those languages do have deep connections that go back to the pre-Roman times.

“So, absolutely, today the name Celtic and the way it’s used to refer to those languages and traditions is referring to a real distinctive history that sets what today we call the Celtic nations apart from their English neighbours,” she says.

It shows how what we call Celtic art and motifs are often a fusion of styles from all over Europe, and documents the appropriation of Celtic stories and images by political movements.

We see Cúchullain in Oliver Sheppard’s bronze The Dying Cuchullain from the GPO in Dublin, but also in Scottish and Manx folklore. The Celtic hero appears again in photographs of both republican and loyalist murals from the North.

A video shows Celtic festivals in Britain and Ireland, but also St Patrick’s Day parades from North America, reflecting what Dr Farley identifies as one of the biggest contemporary trends in Celtic identity.

“It’s become much more of a global term than previously. Although it’s still very much associated particularly with Ireland and Scotland, it’s a word that you more often hear in connection with the Celtic diaspora.

“It’s something that has been picked up by that global diaspora community as a way to express what’s different about their heritage in the new world where they find themselves living.”