Welsh nationalists look to emulate SNP with breakthrough in south 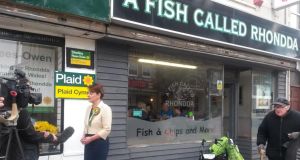 Plaid Cymru leader Leanne Wood speaks to the media outside her party’s office in Treorchy, Wales, which is next door to a fish-and-chip shop. The surge of the Scottish nationalists has turned the spotlight on the difficulties their Welsh counterparts face in making a similar breakthrough. Photograph: Benjamin Wright/PA Wire

The door opens slightly and a middle-aged woman appears, wedging her slight frame against the wall so as to keep a barking dog at bay. She spots the Plaid Cymru rosette on Vaughan Williams’s lapel and shakes her head firmly. “I’m Ukip,” she says.

Her son recently lost out on a job that went to a Pole, she says, and she feels “we’re going to sink” if nothing is done about immigration. “I’ve always been Labour, for years and years,” she says ruefully.

Williams, a 33-year-old first-time candidate, has mixed feelings about these encounters. He has no time for Ukip, he says later as we walk through Burry Port, a small seaside town outside Llanelli. Nigel Farage’s party is “a threat to the Welsh nation”, he says. But Williams is also aware every vote Labour loses to Ukip in this constituency brings him closer to victory. He smiles wryly: vote for the right-wing populism of Ukip, get a self-proclaimed left republican committed to the EU and Welsh independence.

Victory in Llanelli would be a major advance for Plaid Cymru. The constituency has returned a Labour MP in every election since 1922, but Plaid has been chipping away at Labour’s vote here for many years, closing a gap of more than 20,000 in the late 1990s to just under 5,000 five years ago.

Success here, far from Plaid’s northern heartlands, would give the party its first Westminster seat in an urban constituency and “have an impact that would be felt all across the south Wales valleys”, says Sean Rees, the local campaign manager.

When a voter raises the Westminster expenses scandal, Williams says when that story broke he was working a zero-hours contract as a hospital cleaner (the candidate, whose grandfather was from Co Cork, was also a dock worker). Canvassed in his garden, 44-year-old Jarrod Stanley replies that politicians “all talk bollocks” but pledges his vote on the basis that Williams is the only one to have asked for it in person.

At the Plaid Cymru constituency office in Llanelli, recent events in Scotland are on everyone’s minds. Many of Williams’s campaign team travelled north for the closing stages of the independence referendum campaign last year and learned useful lessons from the success of the Scottish National Party.

Williams says the referendum prompted many young people to volunteer for Plaid. But the surge of the Scottish nationalists has also turned the spotlight on the difficulties their Welsh counterparts face in making a similar breakthrough. Why, given the anti-establishment mood and a competitive multiparty landscape, are Plaid’s ambitions limited to adding a seat or two to the three it already holds?

The paths of the two nationalist parties have diverged since 1999, the year devolved powers were transferred to Scotland and Wales. Plaid Cymru did better than the SNP in the first postdevolution elections and was seen as the more professional outfit. But in the following decade, under the lowkey leadership of Ieuan Wyn Jones, the party’s momentum stalled.

At the time, internal battles were taking place within the party over its aims and status, says Dr Craig McAngus of the University of Stirling. “Was Plaid Cymru a political party that existed solely to compete for political power, or was it a sort of cultural pressure group that existed to create a more confident and secure Welsh nation?”

Demographics also worked against Plaid: 20 per cent of the Welsh population was born elsewhere in the UK, compared to 9 per cent in Scotland, and they tend not to vote for the nationalists.

After a poor election in 2003, the SNP overhauled its structures and set out to win power. In Alex Salmond and Nicolas Sturgeon, it has had charismatic and skilful leaders. The party has also been helped, says McAngus, by a strong Scottish media culture and more developed national institutions and civic society.

“Scotland was given a lot more time, historically, to develop its institutional self. Wales was never given that,” he says. “The readership in Wales for Welsh-only newspapers is very low. Many people in Wales don’t watch Welsh TV. So it’s very difficult for a party that defines itself as Welsh-only to break into that narrative.”

Labour’s leaders in the Welsh assembly have been native Welsh speakers and champions of Welsh culture. “Labour in Wales has almost become a soft nationalist party and taken quite a lot of the ground that was Plaid Cymru’s, whereas the Scottish Labour Party hasn’t done that,” Scully adds.

Relations are good between Plaid Cymru and the SNP. Sturgeon has struck up a friendly rapport with Leanne Wood, Plaid’s leader, and they adopt similar rhetoric on austerity and Conservative/Lib Dem welfare reforms. But that “common narrative” masks potential points of tension, says McAngus. Plaid has long bemoaned how the formula used to allocate exchequer funding to Northern Ireland, Scotland and Wales is based largely on population. If it were based on need, Wales would get more and Scotland less.

In Llanelli, resentment over the relative wealth of Scotland comes up at the doors. Vaughan Williams responds that if his party secures Wales parity with Scotland it will be worth an extra £1.2 billion a year. “What’s good enough for Scotland is good enough for Wales.”