Taoiseach lukewarm on notion of a referendum on a united Ireland 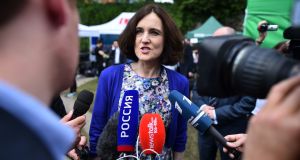 Northern Secretary and Leave campaigner Theresa Villiers said there was “no appetite” for a Border poll. Photograph: AFP

Northern Secretary Theresa Villiers has effectively ruled out a Border poll on a united Ireland despite calls for such a plebiscite from senior Sinn Féin figures.

As the North tried to grapple with the social, economic and political implications of the overall UK vote to quit the EU, Sinn Féin argued that a Border poll on a united Ireland was now essential, particularly as a majority in the North favoured Remain.

The North voted 56 per cent to 44 per cent in favour of staying in the EU but is governed by the overall United Kingdom vote to exit the EU.

Senior Sinn Féin politicians such as Gerry Adams and Deputy First Minister Martin McGuinness called for a Border poll. “The British government has no democratic mandate to represent the views of the North in any future negotiations with the EU. There is now a democratic imperative for a Border poll. The Irish Government should support this,” said Mr Adams.

“There are much more serious issues to deal with in the immediate terms, and that is where our focus is.”

Ms Villiers in a number of interviews yesterday also appeared to rule out any prospect of a referendum on a united Ireland. There was “no appetite” for such a poll, she said.

DUP First Minister Arlene Foster, who campaigned for Brexit, said the Sinn Féin call for a poll was “opportunistic” and as predictable “as the flowers of May”.

Ulster Unionist Party leader Mike Nesbitt also accused Sinn Féin of “opportunism”. He expressed concern that the Northern Executive had not planned for the outcome. “They need to move very quickly to reassure the public that there is a plan, because the full implications for Northern Ireland may not be clear for up to two years.”

SDLP leader Colum Eastwood called on Mr Kenny to act to ensure that controls and restrictions were not introduced along the Border. “The Taoiseach is now the most important person on this island in deciding Ireland’s relationship, North and South, with the European Union. His Government has huge influence in this upcoming negotiation. He must now be a powerful voice on our behalf.”

Alliance MLA Stephen Farry called for an urgent meeting of the Northern Assembly, and said the North was “facing years of financial turmoil in the aftermath” of the vote.

Eleven of the North’s 18 constituencies voted for Remain, while seven voted for Leave. Those in favour of staying in the EU were: Foyle, West Tyrone, North Belfast, West Belfast, South Belfast, East Derry, Fermanagh South Tyrone, Newry and Armagh, North Down, South Down and Mid Ulster.