Ukip in turmoil as favourite excluded from leadership race 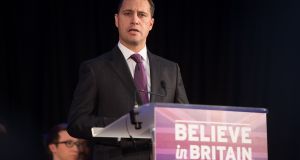 Ukip MEP Steven Woolfe, who has been excluded from the race to succeed Nigel Farage as leader of the party because, its national executive said, his nomination papers were submitted too late. Photograph: Leon Neal/AFP/Getty Images

Britain’s UK Independence Party, whose growing influence helped prompt a June 23rd referendum that saw the country vote to quit the European Union, was plunged into turmoil on Wednesday over the choice of a new leader.

Nigel Farage, among Britain’s most outspoken and effective anti-EU campaigners, said last month he would stand down as Ukip leader after realising his ambition of winning the referendum.

On Wednesday, the party’s National Executive Committee (NEC) said Steven Woolfe, the favourite to replace him, had been excluded from the leadership ballot after submitting his nomination papers late.

The decision is likely to lead to civil war over the future of the party, fuelling tensions between those loyal to Mr Farage and those, including Ukip’s only MP Douglas Carswell, who want to take Ukip in a more liberal direction.

On Sunday, a spokesman for Mr Woolfe said he had submitted his application before the deadline but due to “technical problems” it had gone through 17 minutes too late.

“By a clear majority of NEC members, Steven Woolfe MEP’s application was considered to be ineligible as a result of a late submission,” the party’s returning officer Adam Richardson said in a statement.

It was in a bid to stave off rising support for Ukip that former prime minister David Cameron first promised the EU referendum in 2013, and the party and its large grassroots network played a key role in the campaign to leave the bloc.

Ukip won 12.6 percent of the vote at last year’s national election but due to Britain’s winner-takes-all system, only has one seat in parliament.

Mr Woolfe, the party’s spokesman on migration and financial affairs, said he was disappointed by the decision.

“Over the course of this leadership election, the NEC has proven it is not fit for purpose and it confirmed many members’ fears that it is neither effective nor professional in the way it governs the party,” he said in a statement.

“They have failed to accept that there were serious issues with the application system despite providing evidence that attempts of submission were made before the deadline.”

Mr Woolfe supporters described the decision as a “coup”.

Three NEC members resigned following the announcement, saying in a statement that a growing number of the committee were “placing personal ambitions, loyalties and jealousies at the heart of their decision-making”.

One of those resigning, Michael McGough, said there was bitter fending within the party. “We’re excluding a candidate who is very popular with the membership,” he told BBC radio.

“To me this is a fight for survival. If we don’t get a competent leader ... the party could be finished. It’s life or death now and that’s why I’ve taken such a strong decision to leave the NEC because we need reform and we need it now.”

Mr McGough and fellow resigning members Victoria Ayling and Raymond Finch called for an extraordinary general meeting to hold a vote of no confidence in the NEC, something that has also been backed by major Ukip donor Arron Banks.

Suzanne Evans, previously seen as a possible leader, has also been unable to run in the contest as she was temporarily suspended from the party earlier this year for publicly criticising a Ukip candidate.

Among the six relatively unknown candidates who made the ballot, Ukip European Parliament member Diane James is now the bookmakers’ favourite.