Hilary Benn stepped out of his father's shadow to make an impassioned speech for air strikes in Syria. He also side-stepped the shadow cabinet by lambasting the Labour party for not supporting the air strikes. Video: Parliament TV 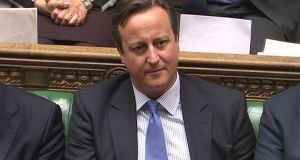 David Cameron was just six sentences into his opening speech in the debate on military intervention in Syria when he faced his first call to apologise for describing opponents as “terrorist sympathisers”.

By the time he was finished speaking, he had heard nine more. The prime minister’s remark to a closed-door meeting of more than 100 Conservative backbenchers on Tuesday night was never likely to remain private for long. But it was just the latest in a catalogue of errors in recent days that has taken much of the shine off his success in persuading parliament to back military intervention.

When Cameron came to the Commons last week to make the case for extending Royal Air Force operations against Islamic State from Iraq into Syria, he was polite, patient, modest and emollient. It was not until MPs had a chance to read his 36-page document fleshing out the argument for bombing in Syria that it became clear he had failed to adequately respond to some key questions.

Within the past week, support among Britons for air strikes fell from 59 per cent to 48 per cent, according to YouGov. But by the time the debate began on Wednesday morning, it was clear that Cameron would secure his majority, with the help of the Liberal Democrats and the two Northern Ireland Unionist parties. The only question was how many Labour MPs, granted a free vote by their anti-war leader, Jeremy Corbyn, would use it to back the bombing.

Most of the party’s MPs, like most of its members, opposed air strikes but as the debate continued into the evening, it was clear that the rebels would include most of the shadow cabinet. This was despite a social media campaign by anti-war activists that was so intense that Corbyn intervened on Facebook on Wednesday to warn that there was no place in the Labour Party for bullying.

Some of the most eloquent arguments in favour of the government’s motion came from the opposition benches and some of the prime minister’s fellow Conservatives were among the most persuasive speakers against it. David Davis, a former Conservative spokesman on home affairs, said everyone could agree with 90 per cent of the motion. The contentious part was whether to engage in bombing.

“That air campaign has so far, in both countries, mounted some 10,000 sorties, one third of them in Syria, against 16,000 targets. The avowed aim? To degrade Isis, or Daesh [Islamic State]. The outcome? In the period in which the campaign has been operating, recruitment to Daesh has doubled from 15,000 to 30,000 personnel. By a macabre coincidence, that is about one extra recruit for every target we destroyed,” he said.