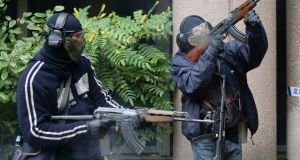 Firearms instructors play the role of terrorists during a Metropolitan Police training programme for armed officers for the eventuality of a terrorist firearms attack in London. Photograph: Yui Mok/WPA Pool/Getty Images

Firearms officers called to tackle terrorist gunmen have been ordered to ignore the injured and dying in the event of a UK attack and instead race towards the threat to try to minimise the total number of casualties in such a situation, a police chief has said.

Since the terror attacks in Paris last month which took 130 lives, British police have been reviewing their tactics. Police chiefs are trying to reassure the government and the public that they could deal with such an event, where multiple targets are hit by a team of terrorists targeting civilians with automatic weapons.

Patricia Gallan, Metropolitan Police assistant commissioner for special crime and operations, said armed officers had been told to ignore the wounded, even if that included their colleagues, and prioritise arresting or shooting armed terrorists.

Ms Gallan said: “We are asking them to do something different from what they did previously. It’s not about standing back but about going forwards towards the threat. In that there may be casualties and in meeting that threat they will have to look over casualties that might have been injured and wait until it’s safe for someone else to go and help.”

The UK’s plans to tackle a terrorist attack involving gunmen have been evolving since 2008, when extremists in Mumbai staged multiple gun and bomb attacks before taking hostages at three sites for nearly three days.

In the Bataclan theatre in Paris, where most of the civilians were killed on the night of the November 13th attacks, gunmen started their massacre after bursting in. French security forces thus stormed the theatre immediately and shot the terrorists dead.

Scotland Yard said it could cope with a Paris-style attack despite being a largely unarmed police force. It said it did not have a shoot-to-kill policy despite the threat from gunmen.Firearms officers have been warned they may face suicide bombers or terrorists armed with AK-47s or other automatic weapons.

On Tuesday, firearms officers staged a training exercise in which they stormed a building taken over by terrorists. Dramatic footage showed armed officers scouring the building floor by floor, opening fire and using stun grenades in the practice assault.

ARVs would be first on the scene, with other specialist firearms officers sent from their bases. The Met has created an SAS-style unit of armed officers to counter the threat of a terrorist gun attack in Britain.

The 130 counterterrorism specialist firearms officers have trained with the army’s special forces to respond to assaults such as which developed into a siege. The army could be called in, but it would take time for them to reach the scene.

The Commons home affairs committee heard that more than 100 people are flagged to counterterrorism units at Britain’s borders every week. The disclosure came as Sir Charles Montgomery, director general of the Border Force, was questioned about the exodus of Britons to fight alongside Islamic State in Syria and Iraq.

Police estimate that 800 people have made the journey and about half have returned to the UK. Mr Montgomery said his organisation was conducting hundreds of checks on routes into and out of the UK.