Two 14-year-olds charged with murder of mother and daughter 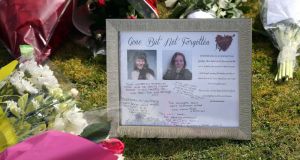 Tributes outside a house in Spalding, Lincolnshire, where a woman and her daughter were found dead. Photograph: Chris Radburn/PA Wire 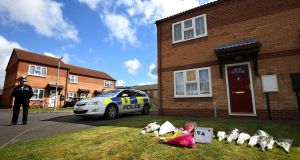 The scene outside a house in Spalding, Lincolnshire, where a woman and her daughter were found dead. Photograph: Chris Radburn/PA Wire

Two 14-year-olds have been charged with murder after a woman and her daughter were found dead at a house in Lincolnshire.

The victims, named by police as 49-year-old Elizabeth Edwards and her 13-year-old daughter Katie, were found at the property in Dawson Avenue, Spalding, on Friday afternoon.

The two youths will appear at Lincoln Magistrates’ Court on Monday.

Detectives are appealing for sightings of suspicious activity near the victims’ home.

One resident living close to Ms Edwards’s semi-detached property in Dawson Avenue, Spalding, said she last saw her on Tuesday.

The neighbour, who declined to be named, said: “She was a lovely lady, very friendly and I knew her quite well.

“She was quite well-known because she worked at a primary school and what has happened is just unbelievable. Katie was lovely too but very quiet.”

Several bunches of flowers and a teddy bear had been placed on the front lawn of the house by friends of the family, as forensic experts continued to examine the inside of the house.

The officer said: “I would like to make clear that this type of crime is extremely rare.

“Indeed, we believe this is a completely isolated incident.

“There is still a lot of police activity in the area and extra officers in the neighbourhood and I would encourage anyone who has any concerns to please talk to our officers.”

Mr Timmins added: “This is very much an active investigation that is in its early stages and police would like people not to speculate as to the circumstances surrounding it.

“We are looking at a number of lines of inquiry and doing our utmost to get to the bottom of what has happened.”

Detective Chief Inspector Martin Holvey, who is leading the investigation, said: “I would like to hear from anyone in the area of Dawson Avenue from Wednesday at 12pm to the same time yesterday and who may have seen or heard anything suspicious or that they think may be relevant to the inquiry.”

Anyone with information to assist the inquiry is urged to contact police directly on 101 or pass information anonymously to Crimestoppers on 0800 555 111.