Document assesses three scenarios and claims economy would shrink by 6% 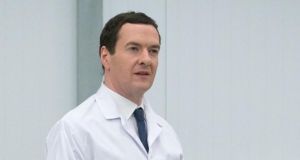 British chancellor of the exchequer George Osborne: ‘Wages would be lower and prices would be higher.’ Photograph: Matt Cardy/PA Wire

U would cause Britain’s economy to shrink and tax receipts to plummet, and cost the average household thousands of pounds a year, an official analysis from the UK treasury has warned.

The 200-page document assesses the economic impact of three post-Brexit scenarios, concluding that the economy would be likely to be 6 per cent smaller by 2030, the equivalent of £4,300 (€5,400) a year for each household.

“Under any alternative, we’d trade less, do less business and receive less investment, and the price would be paid by British families. Wages would be lower and prices would be higher,” chancellor of the exchequer George Osborne said.

“The most likely result is that Britain would be poorer by £4,300 per household. That is £4,300 worse off every year, a bill paid year after year by the working people of Britain.”

Leave campaigners dismissed the figures as deeply flawed, questioning the validity of dividing the projected fall in GDP by the UK’s current 27 million households, to produce an average annual loss of £4,300.

“It is not credible to make these claims without showing your workings or the alternative you are comparing it to. It also ignores the treasury’s own analysis that EU regulation costs the UK economy much more – a staggering £125 billion a year. As the prime minister himself said, we are the fifth biggest economy in the world, and outside of the EU we won’t stop trading with Europe, ” he said.

The treasury assessment is broadly in line with independent analyses from the London School of Economics, Oxford Economics and others. Paul Johnson, director of the Institute for Fiscal Studies, said it was impossible to predict how big the British economy would be in 15 years, but the report was right about the “direction of travel”.

Ukip donor and Leave campaigner Arron Banks said the “flimsy report hasn’t even successfully produced the sort of nightmare vision which George Osborne wants to sell us. Their worst-case scenario of £4,300 per household is a bargain basement price for the restoration of national independence and safe, secure borders.”