Tony Abbott ‘the wrong appointment on every level’ as trade adviser 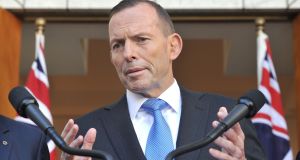 Tony Abbott has attracted criticism over comments he has made about women and gay people. Photograph: Getty Images

Former Australian prime minister Tony Abbott says he is looking forward to contributing his “expertise” in global commerce to help Britain in his new role as adviser to the UK Board of Trade.

Mr Abbott’s appointment has sparked a heated reaction in some quarters, with critics saying he is well known for holding misogynistic and homophobic views, as well as drawing attention to his scepticism on climate change.

After British prime minister Boris Johnson came out in support of the 62-year-old, Mr Abbott — who led Australia from 2013-15 — said he was “only too keen” to help the UK and looked forward to helping facilitate trade deals “between Britain and other countries, including Australia”.

“A UK-Australia trade deal, maximising the movement of goods, services and people is clearly in the best interests of both our countries,” Mr Abbott said in a statement on Twitter.

“It’s important for the wider world that Britain make the most of its post-Brexit opportunities and I am proud to be playing a part.”

“My government finalised trade deals between Australia and China, Japan and Korea. I’m looking forward to bringing that expertise to bear as Britain works towards mutually beneficial improvements with its major trading partners.”

The appointment of Mr Abbott, who has also said coronavirus restrictions should be lifted, seems to have caused divisions even among his fellow Board of Trade appointees.

Anne Boden, founder of the online-only bank Starling, tweeted to say she was “pleased to be advising the Board of Trade” and said it was “important that we have challenging voices” speaking to ministers.

But the financial-technology expert added that she supported diversity and “so did this woman”, linking to a 2012 speech by another former Australian prime minister, Julia Gillard, in which she accused Mr Abbott of being a misogynist in the country’s parliament.

Wales-born Ms Gillard quoted the then-leader of the opposition as having asked during a discussion “What if men are by physiology or temperament more adapted to exercise authority or to issue command?”

London-born Mr Abbott, who moved to Australia with his family aged two, also campaigned as an MP against Australia’s ultimate adoption of same-sex marriage legislation in 2017, and once said he felt “a bit threatened” by homosexuality.

Mr Johnson has defended him, heralding his status as a former leader of “freedom-loving” and “liberal” Australia.

The British Department for International Trade formally announced on Friday Mr Abbott would form part of the new-look Board of Trade, in what is said to be an unpaid role.

In its announcement, the department stressed advisers to the board would have “no direct role in striking trade deals”.

The UK is currently looking to agree its own trade agreements for the first time in more than 40 years after leaving the European Union in January.

It is conducting negotiations with the US, Japan, New Zealand and Australia.

The senior Labour figure said Mr Abbott had a “history of offensive statements” and argued the Oxford University graduate had “no experience of detailed trade negotiations” and blamed him for “killing off Australia’s car industry”.

“Tony Abbott is therefore the wrong appointment on every level, which begs the more important question of why on earth Boris Johnson and Liz Truss have given him the job,” said Ms Thornberry.

The SNP called the decision “beyond indefensible” and said it “speaks volumes about the kind of Tory Government this is”. – PA