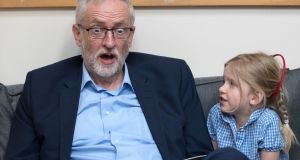 Theresa May has risked upsetting core supporters by promising to continue spending 0.7 per cent of Britain’s economic output on international aid and refusing to commit to a “triple lock” that guarantees the value of pensions. Meanwhile, chancellor Philip Hammond suggested that the Conservatives would not repeat a promise made in 2015 not to increase income tax.

Conservative backbenchers and the Daily Mail newspaper have called in recent weeks for Britain to abandon its pledge to spend a fixed percentage of GDP on international aid. Speaking during a campaign event in her Maidenhead constituency, however, Ms May said she was committed to it.

“Let’s be clear. The 0.7 per cent commitment remains and will remain. What we need to do, though, is to look at how that money is spent and make sure that we are able to spend that money in the most effective way,” she said.

“I’m very proud of the record that we have of the children around the world who are being educated as a result of what the British government, the British taxpayer is doing in terms of its international aid.”

During the same event, the prime minister was asked about the triple lock, which guarantees that the state old-age pension will increase every year in line with inflation, average earnings, or 2.5 per cent, whichever is highest. Some 47 per cent of voters aged over 65 backed the Conservatives in 2015, compared with 23 per cent for Labour, but Ms May refused to commit to keeping the triple lock on their pensions.

“What I would say to pensioners is just look what the Conservatives in government have done. Pensioners today are £1,250 a year better off as a result of action that has been taken. We were very clear about the need to ensure that we support people in their old age and that’s exactly what we have done,” she said.

Speaking in Washington, where he was attending the spring meeting of the International Monetary Fund, Mr Hammond said David Cameron’s promise not to increase income tax, national insurance or VAT constrained the government in managing the economy.

“I believe in lower taxes. And I want to see Britain as a high skill, high unemployment, high growth, low tax economy. I say low tax, I mean sensibly taxed economy. So I’m not in the business of having some ideological desire to increase taxes. But I also think we need to manage our economy sensibly and sustainably,” he said.

Labour leader Jeremy Corbyn received a boost on Friday when his ally Len McCluskey was re-elected leader of Unite, Britain’s biggest union. Just over 12 per cent of the membership voted in a contest dominated by Mr McCluskey’s support for Mr Corbyn and the union leader’s role in Labour Party politics.

Tony Blair said on Friday that, with polls pointing to a big victory for the prime minister on June 8th, pro-Europeans should come together behind candidates who share their views on Brexit.

“I propose that the organisations that want to keep open the right of people to change their minds on Brexit, depending on the outcome of the negotiation, come together to mobilise voters to demand from candidates a clear statement of their position on Brexit; in particular, whether they would refuse to support a deal that substantially diminishes our access to the single market or a “no deal” outcome”, the former prime minister wrote in the Evening Standard.