The year Boris Johnson became the sick man of Britain 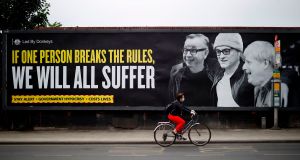 2020 was always likely to end with deadlines falling and businesses panicking while Britain and the European Union struggled to agree a post-Brexit free trade agreement.

But as Boris Johnson settled back into Downing Street in January after a mysteriously funded holiday on the Caribbean island of Mustique, he could not have predicted much else about the year ahead.

Fresh from a thumping election victory last December which gave the Conservatives their biggest majority in 30 years, the prime minister had grand ambitions to reshape the state, “level up” poorer regions and invest in everything from roads and bridges to science, education and technology.

Johnson’s most important ally in this endeavour was his chief adviser Dominic Cummings, the architect of the 2016 Vote Leave campaign and the brains behind last year’s election victory. By the end of the year, however, Johnson would have come close to death from coronavirus, his 80-seat majority would be vulnerable to numerous backbench rebellions, his government would be a byword for incompetence, and Cummings would be gone.

The year began with a distraction from politics when Prince Harry and his wife Meghan, the Duke and Duchess of Sussex, said they were quitting their roles as senior members of the royal family and moving abroad. The decision followed months of feuding with the British press and, according to royal gossip, Prince William and his wife Catherine, the Duke and Duchess of Cambridge.

After a brief stay in Canada, the couple moved to Los Angeles where, despite warnings that they would be adrift without the support of the royal household, they have flourished financially. They signed a contract with Netflix worth up to $100 million (€82 million), they earn huge fees for corporate speeches, and in December they sealed a lucrative deal with Spotify to host and produce podcasts.

Britain left the EU on January 31st with a countdown clock projected on to 10 Downing Street and Johnson promising the best possible relationship with Europe.

“We want this to be the beginning of a new era of friendly co-operation between the EU and an energetic Britain, a Britain that is simultaneously a great European power and truly global in our range and ambitions,” he said.

Less than a month later, he would threaten to walk away from trade talks in June if he did not see the shape of a deal emerging to his liking. It was the first of many empty threats during the negotiations.

Meanwhile, Cummings was putting his stamp on the government, sacking some political advisers and terrifying others with claims that he had spies in every Westminster restaurant to make sure they didn’t leak to journalists. When he insisted on appointing each minister’s special advisers himself, most went along with it, but Sajid Javid resigned as chancellor of the exchequer, saying no self-respecting minister would accept such conditions.

The reshuffle that followed saw the talented Rishi Sunak succeed Javid but various loyal mediocrities were promoted while a strong performer like Julian Smith was sacked as Northern Ireland secretary.

While Cummings was laying down the law inside No 10, his Vote Leave sidekick Lee Cain was prosecuting a war of attrition on the media. Television and radio programmes deemed insufficiently friendly, including Radio 4’s Today and ITV’s Good Morning Britain with Piers Morgan, faced a boycott while political journalists were fed scraps of sometimes dodgy information, coated in contempt.

Nobody guessed it at the time but this was to be the apogee of Cummings’s power because the first cases of coronavirus were already present in Britain and the pandemic would soon overwhelm the government and make Johnson’s chief adviser a national symbol of privilege and hypocrisy.

From the start, Britain’s approach to the pandemic set it apart from its European neighbours and exposed the government to criticism from within the medical community and even from political allies.

Richard Horton, editor-in-chief of the medical journal the Lancet, accused the government in early March of “playing roulette with the public”. And former Conservative health secretary Jeremy Hunt expressed concern over Britain’s failure to close schools and cancel mass gatherings.

“Our aim is to try and reduce the peak, broaden the peak, not suppress it completely; also, because the vast majority of people get a mild illness, to build up some kind of herd immunity so more people are immune to this disease and we reduce the transmission, at the same time we protect those who are most vulnerable to it. Those are the key things we need to do,” chief scientific adviser Patrick Vallance told the BBC.

By March 23rd, with daily deaths above 300, Johnson abandoned that strategy and put the country into lockdown but the government hit a fresh crisis a few days later when the prime minister and health secretary Matt Hancock both tested positive for the virus. Hancock recovered quickly but Johnson’s symptoms worsened and in early April he was admitted to hospital where he was treated in intensive care.

It emerged later that, contrary to upbeat briefings from Downing Street the prime minister, whose partner Carrie Symonds was expecting a baby, came close to death. He was released from hospital to an initial surge of sympathy and popularity but the government’s incompetent handling of the pandemic continued to raise questions about his leadership.

These questions became more acute after Keir Starmer succeeded Jeremy Corbyn as Labour leader following a three-month contest during which he was always the clear favourite. A former director of public prosecutions, Starmer skewered Johnson at prime minister’s questions every week, his lawyerly command of detail exposing cruelly Johnson’s unwillingness to master a brief.

In May it emerged that Cummings had made a 418km journey from London to Durham during the lockdown after his wife became ill with suspected coronavirus. Dozens of Conservative MPs called for him to be sacked but Johnson refused to do so and in an extraordinary press conference in Downing Street’s rose garden, Cummings defended his actions, refused to apologise, blamed the media and said he had never considered resigning.

In a bizarre account of his actions, Cummings confirmed that he had left his parents’ farm where he was staying to drive for 30 minutes to the town of Barnard Castle.

He said he went on the outing with his wife and son to see if his eyesight was good enough to drive back to London the following day.

“My wife was very worried, particularly given my eyesight seemed to have been affected by the disease. She didn’t want to risk a nearly 300-mile drive with our child, given how ill I had been. We agreed that we should go for a short drive to see if I could drive safely,” he said.

The controversy saw an immediate drop in support for the Conservatives and although Cummings survived as Johnson’s most powerful aide, he was a diminished figure. He and Cain left Downing Street in November after a power struggle that saw them outmanoeuvred by a rival faction including Symonds.

A former director of communications for the Conservative Party, Symonds is an accomplished political operator with a deep network of allies in the party and in the right-leaning press. Cummings wanted Cain as Johnson’s chief of staff but Symonds opposed it and the two Vote Leave veterans left after the prime minister sided with her.

Cummings’s departure has left Johnson without the political visionary who helped to win him the premiership but it also offers him an opportunity for a fresh start with a more conventional, efficient Downing Street operation as he faces into what is likely to be another turbulent year in 2021.