Miliband ‘won’t get his budget unless he compromises’, says Nicola Sturgeon 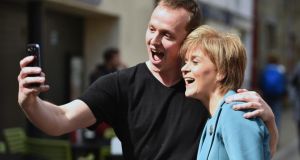 Scottish First Minister Nicola Sturgeon has said the Scottish National Party will be prepared to vote down a minority Labour government’s budget.

Heightening the war of words with Labour leader, Ed Miliband, who has ruled out a deal with the SNP, Sturgeon said: “He won’t get his budget unless he compromises.”

Last night, however, Labour believed that the SNP leader has miscalculated by admitting clearly fir the first time that she would be prepared to vote alongside the Conservatives.

Earlier, Mr Miliband addressed supporters in Glasgow, urging voters in Scotland not to ”gamble” on the SNP and insisting “you can guarantee change with Labour”. He said his opposition to any post-election deal with

Ms Sturgeon’s SNP is for “principled reasons”, adding: “We cannot do a deal with a party that wants to break up the UK when we want to build it up.” ELECTION Scotland Labour Lead ran on the wire at 1900.