Cameras to monitor what waste is being placed in green bins 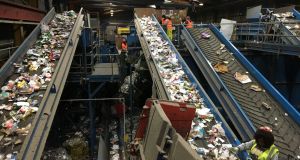 A pilot scheme aimed at detecting people who persistently abuse free waste recycling by putting black bin rubbish, for which there is a charge, into their green bins is to be tested shortly on some 12,000 householders in Fingal, Co Dublin.

Cameras mounted inside refuse collection lorries will record what emerges from individual green bins when they are tipped into the vehicle.

The household to which the bin is attached will already be known to the camera from the chip inside the bin which is read as it is tipped up.

A photograph of the rubbish will reveal if prohibited material, typically disposable nappies, and food waste, has been put into the recycling bin. The image will identify the household to which the bin was assigned and will also highlight the prohibited material.

The householder will be written to and shown the photograph of the offending material. A fine, yet to be finalised but initially perhaps €10, will be levied on the offender, with a second offence attracting a higher fine and a warning that rubbish collecting will cease if the behaviour continues.

The move, by Panda Waste Management, has been prompted by increasing abuse of recycling by Dublin householders.

As a result, some 40 per cent of waste collected for recycling is contaminated.

“For every 100 tons that comes in here for recycling, 40 tons is pure sh*te –nappies, clothes, food and garden waste – there’s no other word for it. All stuff that doesn’t belong there. We’ve had dead dogs put in recycling bins.”

A typical household will have a green bin of recyclable materials emptied about 26 times a year and a black bin 17 times a year. There is no charge for the green bin but the black bin attracts a tariff.

Suspicions are aroused when the use of the black bin falls to perhaps as few as two lifts a year.

“This is not ignorance,” says Dunne. “This is people putting nappies into boxes to hide them in green bins or just throwing food waste into green bins. It is professionally avoiding waste charges by putting black bin waste into recycling, which also damages the recyclable materials.”

Panda’s Ballymount plant is the largest of its type in the country and employs 100 people working in two shifts. The €18 million worth of equipment inside the plant is serviced during a third shift.

The plant is a complex and noisy network of fast-moving conveyor belts, ferrying rubbish into hoppers, separating the waste by using weight- and light-sensitive alerts that trigger loud bursts of air, blowing the waste onto branch lines of the conveyor belt system and, ultimately, into different receptacles.

Along the way, the small army of workers, some wearing face-masks, handpick out contaminating items, including food waste and nappies, and unrecyclable plastics.

Separated and accumulated materials are bailed for shipping; waste that can’t be recycled goes to landfill.

“Aluminium cans, there’s the money,” says Dunne, standing beside a large cage into which a conveyor belt is tipping them. “High-density plastic milk containers, they’re valuable too.”

About 50 per cent of what comes through the plant is paper and cardboard and most of what is recyclable is shipped to China. Economies of scale mean a paper recycling plant needs to take in five million tons a year to be viable.

“My goal in the pilot scheme is a 50 per cent reduction in contamination,” says Dunne, “and that would justify a full roll-out. This isn’t about fining people but changing behaviour.”