There have been major delays at London City Airport after a group of 'Black Lives Matter' protesters forced their way on to the runway. Video: Reuters 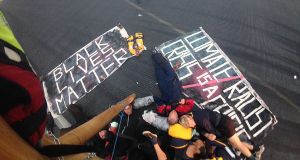 a handout photo issued by Black Lives Matter UK of protesters after they blocked the runway at London City Airport. Photograph: PA 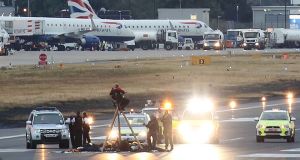 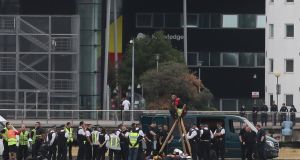 Emergency services surround protestors from the movement Black Lives Matter after they locked themselves to a tripod on the runway at London City Airport in London. Photograph: Getty 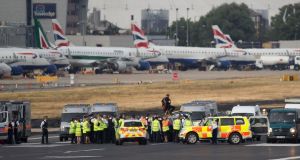 Emergency services surround protestors from the Black Lives Matter movement after they locked themselves to a tripod on the runway at London City Airport. Photograph: Getty 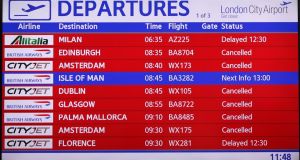 An information screen lists cancelled and delayed flights at City Airport after a protest closed the runway in London. Photograph: Reuters

Security at London City Airport has been criticised after a Black Lives Matter protest grounded all flights for a number of hours this morning.

The final two activists were arrested at around 11.25am, Scotland Yard said, nearly six hours after the nine-strong group occupied the single runway.

The protesters were being held on suspicion of aggravated trespass, being unlawfully air-side and breaching airport by-laws, police said. An airport spokesman said: “We are preparing the airfield to resume operations as soon as possible.”

The demonstration resulted in all flights in and out of the airport being cancelled, delayed or diverted. The airport tweeted after midday that the runway has now reopened.

Earlier, several emergency service vehicles were parked on the runway as attempts were made to clear the protesters.

Runway is now open, we apologise for inconvenience caused this morning. Passengers are advised to check with airline for latest flight info.

A man in black, who had attached himself to the top of a wooden structure, was surrounded by police officers and a set of aircraft steps was wheeled up to him in an apparent bid to get him down. Police boats could also be seen circling the dock surrounding the runway.

Having attached a helmet to the man, police removed him from the top of the structure and on to the plane steps. After sitting briefly on the platform with a rope around him, he was taken down. A police van was seen driving down the runway, away from the scene.

Passenger Casey Collins said customers were unaware of the protest until after 8am, and assumed the delays were related to IT glitches at Heathrow and Gatwick. The freelance management consultant, from Devizes in Wiltshire, was supposed to be on a 7.35am flight to Luxembourg.

He said: “We didn’t know why we weren’t being called to board - it just said the next information would be at 8am and that people were being encouraged to queue up at the info desk. “But the problem was that there were only two or three staff there and the queue was about 150 yards long, so it was impossible.

“Pretty soon they realised they would have to do a queue-walk to inform everyone. People were behaving themselves, they know it was not the airport’s fault, but for a time it was a bit chaotic.” He said passengers were offered refunds for cancelled flights, while delayed passengers were also given refreshment vouchers.

Fellow passenger Chanel de Kock said she was stuck for three-and-a-half hours upon arrival in London. She said: “I wish the airport would tighten their security as it’s a bit worrying that people can access the runway so easily in the current state of our times, and also that the airport will be better at giving information to people at the airport.

“It was absolute chaos and really badly handled by what I thought was my favourite airport.” It is the latest demonstration involving the anti-racism activists, who brought traffic to a standstill outside Heathrow Airport - and carried out similar protests in cities around the country - in a co-ordinated day of action last month.

The campaigners, whose international movement was set up following the killing of black teenager Trayvon Martin in Florida four years ago, said Tuesday’s action was taken “in order to highlight the UK’s environmental impact on the lives of black people locally and globally”.