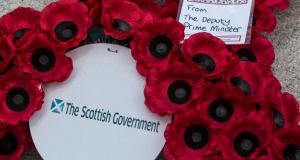 Poppie wreaths from the Scottish government at the Cenotaph in Glasgow. The war had a lasting impact on life inthe Scottish glens. Photograph: Robert Perry/EPA

The white-washed church at Glen Prosen village in the Braes of Angus, more than 200 years old, lies at the fork of the Inchmill Burn, behind a gate that struggles weakly when opened.

In the days before the first World War, Prosen was, the guides say, a sizeable hamlet, with nearly 50 homes, a water-powered corn and sawmill, a school, pub, post office and blacksmith.

The closure of the school in the 1980s, in common with so many other places, was a significant waypoint in the gentle decline of the glen over the last 200 years.

Today, few of the homes that existed on the eve of war are left. The blacksmith’s is gone, too. In August 1914, its craftsman, David Smith was already in the Territorials. By November he was in France.

Nearly 60 men from the glen, including some who had left before August 1914, served during the conflict, some for excitement, others to escape poverty, some for principle.

Today, a simple tablet in the nave of the church lists the names of 11 of the glen’s men who never came back to the Braes of Angus that lead into the Grampians.

The story of Glen Prosen and so many other places in Scotland during the first World War is superbly told by Trevor Royle in his book Flowers of Scotland.

Three more of Glen Prosen’s dead are not listed on the roll: Corporal W Addison from Tombeth, Private W Leighton from Clova and Sapper WT White from Inchmill. Twenty more were wounded, some left crippled by the effects of shell-shock: a local shepherd, David Shaw was wounded four times during four years of battle.

However, carved lists never tell the human stories. Helen Burness Cruickshank, a poet, worked as a postgirl during the summer of 1918, rejoicing in “the sweet smell of birches after rain”.

During her time, “no news of casualties” came by telegram. Indeed, she enjoyed the opposite: the joy of the glen when it heard that a favourite thought dead was alive.

“The whole glen seemed to smile that day when his wife learned that he was a prisoner of war, and with her I drank his health in yellow, lumpy buttermilk,” she recorded.

The good news later turned to grief, with news that the man, John Leighton, a forester at Balnaboth serving with the King’s Own Scottish Borderers, had died in a prison camp.

The memorial in the church is not the only mark left by war, since the losses suffered were not just numbered by those who fell in Flanders’ field, or countless other killing grounds.

Following the war’s end, 25 men chose not to come back to a life of drudgery to work for the estates, depriving the glen of bloodlines.

For the men who did come back, life resumed much as before, with long hours and isolation which created “strange folk, often to the point of eccentricity”, as a rural historian put it.

Unlike elsewhere, however, Glen Prosen escaped some of the post-war suffering that led to the sale of one in five of Scotland’s estates in the three years after the guns went silent.

But the haemorrhage continued from Prosen and hundreds of other glens, often to the west of Scotland, sometimes for life in Australia, Canada and others parts of empire.

One hundred years on, Glen Prosen has two memorials: one, a monument near its mouth marking the friendship between Antarctic explorer Robert Scott and scientist Edmund Wilson, who worked in the glen. Both are remembered by history. However, the tablet in the church at Prosen is a reminder of how a Grampian glen was changed irrevocably by the guns of August.