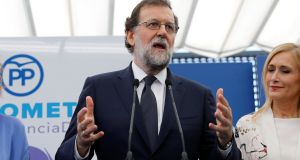 Spanish prime minister Mariano Rajoy was forced to defend his leadership of the conservative Popular Party (PP) and distance himself from its allegedly corrupt practices during an unprecedented high court appearance on Wednesday.

Mr Rajoy appeared as a witness in the Gürtel case, a trial of 37 people accused of involvement in a kickbacks-and-bribery scheme, which centres around the relationship between the PP and businesses.

He is the first serving Spanish prime minister to testify in court, making this the most eagerly awaited session of the trial. For nearly two hours, Mr Rajoy faced questions from plaintiff lawyers about his involvement in and knowledge of irregular financial activities within his party.

In his answers, Mr Rajoy sought to play down his closeness to some of the key figures in the case, such as Francisco Correa, whom investigators identified as a powerful intermediary between the PP and many of the companies it employed.

“I don’t know about the activities of Correa because I didn’t even know him,” the prime minister said. “I’m sorry but things are as they are and not as some people would like them to be.”

Mr Rajoy described as “absolutely false” reports that he had received cash from a party slush fund financed by corporate bribes, as documents kept by former party treasurer Luis Bárcenas had suggested. He also denied any knowledge of the existence of such a fund.

During an often tense session, in which the judge frequently chided the plaintiff lawyers, Mr Rajoy insisted that, as a senior figure in the PP since the early 1990s, his role had been exclusively political and not financial.

“As I told you before, I was never in charge of anything to do with accounting,” he said at one point, adding: “I just cared about the national audit office’s reports which said that the accounts were correct and that’s all.”

Mr Rajoy’s appearance appears to have shed little new light on the case and his status as witness, rather than defendant, means it is unlikely to have major judicial repercussions for him.

However, the fact he had to testify at all was deeply embarrassing. Mr Rajoy had unsuccessfully asked to give his testimony via video link and, on arriving by car at the court building, just outside Madrid, he was harangued by angry demonstrators.

With Mr Rajoy’s government determined to focus on issues such as the economic recovery and stopping Catalonia’s independence drive, this was an unwelcome distraction and a reminder of the PP’s difficulty in putting its many corruption woes behind it.

Pedro Sánchez, leader of the opposition Socialist Party, said the prime minister’s appearance had failed to clear his name. “Mr Rajoy, for the dignity of democracy, you must resign,” he said.

Pablo Iglesias, leader of the leftist Podemos, also called for the prime minister’s resignation, saying: “Either Rajoy is lying to protect the PP, or he is an incredibly negligent gentleman.”

Although this corruption case has damaged the popularity of Mr Rajoy and his minority government, it is unlikely to unseat him given that there is no alternative governing majority in parliament.