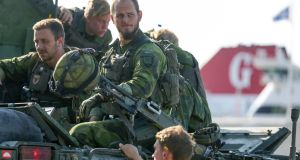 Sweden is to re-introduce military conscription next year due to difficulties filling the ranks on a voluntary basis at a time of increased security concerns, the defence minister said on Thursday.

Non-aligned Sweden ended compulsory military service in 2010 but military activity in the Baltic region has increased following Russia’s annexation of Crimea in 2014, prompting Sweden to step up its military preparedness.

The decision to reintroduce the draft will cover men and women born in 1999 or later, though only a small minority will be selected to serve.

“We have had trouble staffing the military units on a voluntary basis and that needs to be addressed somehow,” Swedish defence minister Peter Hultqvist told public service radio SR.

Military service was the norm for young Swedish men during the Cold War but conscription was gradually watered down after the collapse of the Soviet Union as war in the region looked increasingly unlikely.

But a resurgent Russia and tensions over the conflict in Ukraine have left politicians on both sides of the aisle looking to boost military capability and address the lack of talent keen on making a career as a professional soldier.

Signs of the lack of military preparedness have cropped up in recent years, as when Russian warplanes carrying out a mock bombing run on Sweden in 2013 caught air defences napping.

The government’s decision entails the call-up of 4,000 men and women for military training in 2018 and 2019 and Hultqvist told SR that motivation would be an important factor when selecting the recruits for service.

Sofia Hultgren, who turns 17 later this year and thus could be drafted in coming years, said many young Swedes viewed lengthy careers as military professionals as something odd and old-fashioned.

“I think many see it as something lame, something your father did, when there are so much other fun things to do,” Ms Hultgren, a student said.

Still, she welcomed the reintroduction of military service and said she consider such training even if she did not want to make it a career.

“I think this can give a feeling of comfort. Conscription strengthens our defence when we see so much ugliness in the world,” she said.

A government investigation last year found that with unemployment near zero among the talented youngsters the armed forces targets, only about 2,500 were recruited annually while the military needed 4,000.

The wages for professional soldiers run well below the national average for the age group, providing little monetary incentive, while the pool of potential recruits, primarily former conscripts from before 2010, has steadily shrunk.

“This buffer is now exhausted and that leaves great challenges in recruiting,” said Johan Osterberg, a researcher in staffing at the Swedish Defence University.

Sweden, which is not a NATO member, has since increased spending and reassigned troops to the Baltic Sea island of Gotland besides urging local governments to step up contingency planning for a future war.