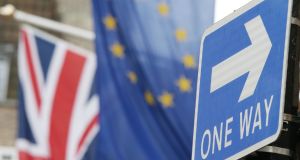 A road traffic sign in front of the UK and EU flags hanging outside Europe House in Smith Square, London. Theresa May has said she will invoke article 50 of the Lisbon Treaty by the end of March. Photograph: Yui Mok/PA Wire

Theresa May has been given the legal power to start Brexit talks after the Queen granted royal assent to the article 50 Bill.

Speaker John Bercow told MPs that the European Union (Notification of Withdrawal) Bill, which was passed by MPs and peers on Monday, had received its final sign off, prompting cheers from the Conservative benches.

Ms May has said she will invoke article 50 of the Lisbon Treaty, the legal mechanism for withdrawal from the EU, by the end of the month in what will be a “defining moment” for the country.