Average of 92 women raped every day, with tourists told to avoid skirts and walking alone 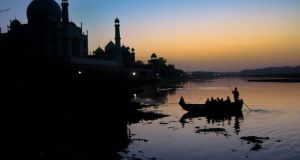 Agra, home of the Taj Mahal, is among the cities highlighted in the India travel advice section, where the Department of Foreign Affairs warns that women have been the victims of sexual assault. Photograph: Jayanta Shaw/Reuters

Female tourists visiting India continue to face high risks of sexual violence despite advice from foreign governments to take extra care and attempts by the Indian government to introduce measures to curb the culture of violence against women.

According to India’s National Crime Records Bureau (NCRB), an average of 92 women are raped in India every day with the number of reported rapes doubling in New Delhi between 2012 and 2013. In 2016, the NCRB revealed that at least 34,651 cases of rape were reported in India in 2015, or one every 21 minutes.

India’s problem with sexual abuse and harassment garnered worldwide attention in late 2012 when a 23-year-old Indian student was gang-raped and murdered.

Jyoti Singh was travelling home from the cinema with a friend when she was attacked by six men on a bus. She died from her injuries 13 days later while undergoing emergency treatment in Singapore.

The case, which sparked international interest, led to demonstrations across India calling for stronger measures to end sexual violence towards women.

In early 2014 a Polish woman living in India was abducted and sexually assaulted in New Delhi. She was with her two-year-old daughter at the time. In November 2014, a Japanese woman was raped after she was reportedly trapped by a group of tour guides.

In September 2015, a Californian woman who was visiting Dharamsala, the home of the Dalai Lama, reported to police she had been raped by two men. Earlier that month, three men accused of raping a 19-year-old Japanese tourist in Jaipur in the western state of Rajasthan were sentenced to 20 years in prison.

Officials admit that many rape cases never get to court in India where there is intense social pressure against families reporting sexual assaults and where women are often blamed for the attacks because of the way they dress and behave. And when women do report rapes, police often refuse to file charges and pressure the victims to reach a compromise with their attackers.

In its own safety and security advice for women, the Department of Foreign Affairs recommends that women “exercise caution” when travelling in India and that recent sexual attacks “show that foreign women are at risk”.

In a section entitled “women travellers” in the India travel advice section, the department warns that women have been the victims of sexual assault in Agra, Goa, Delhi, Bangalore, Madhya Pradesh, Kolkata and Rajasthan. It says women often receive unwanted attention in the form of verbal and physical harassment and adds that cultural norms towards women in India are very different to Ireland.

“Women should consider travelling in a group in India,” writes the department. “If you are a woman travelling in India you should respect local dress codes and customs and avoid isolated areas, including beaches, when alone at any time of day. Women should be cautious about sharing information such as their room number or address with people who they do not know very well.”

The site also recommends women use the “women’s only carriage” when travelling on the metro . Women-only carriages were introduced on the New Delhi metro in 2010 for female passengers worried about safety.

Foreign travel advice on the UK Government’s foreign office website also recommends “extreme caution when travelling in India” and warns that reported cases of sexual assault against women and young girls are increasing.