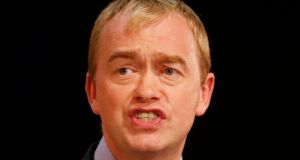 Former Liberal Democrats president Tim Farron has been urged to “step up” and lead his party in the wake of last week’s “devastating” general election results.

The Liberal Democrats have gone from being part of the government to having just eight MPs at Westminster following the vote, with leader Nick Clegg standing down in the aftermath of its heavy losses.

Scottish Liberal Democrats leader Willie Rennie and the party’s leader in Wales, Kirsty Williams, have jointly called on Mr Farron to stand for the post.

The former party president was hailed as being a “committed liberal, a brilliant communicator, an outstanding campaigner and an inspirational leader” by both Mr Rennie and Ms Williams.

Mr Farron is widely expected to be one of the frontrunners to succeed Mr Clegg, along with former minister of state for care and support Norman Lamb.

Nominations for the party leadership open on Wednesday. To get on the ballot a contender must secure the endorsement of 10 per cent of MPs - which now stands at less than one member of parliament - as well as 200 members from at least 20 local Liberal Democrats parties.

The wider membership then elects the winner via an alternative vote system, with the verdict due on July 16th.

In a joint statement, Mr Rennie and Ms Williams said: “Thursday’s results were devastating for the Liberal Democrats.”

They said that “despite our loss, our party remains optimistic, hopeful and confident about what we can achieve on behalf of Britain”.

They said the Lib Dems “now have to earn the right to be listened to again”.

Mr Rennie and Ms Williams said: “To move forward we need a fresh start. With that in mind, we call on Tim Farron to stand to be our next federal leader.

“We believe he is the right person to rebuild our party, inspire and lead us into next year’s election campaigns. We will wholeheartedly support him if he decides to put himself forward.

“Tim is a committed liberal, a brilliant communicator, an outstanding campaigner and an inspirational leader.

“With him as leader we can show that we are a compassionate, tolerant, internationalist, reformist party that looks beyond sectional interest to the greater good, to our children’s future, not just ours, that believes in partnership home and abroad, not division, [and] that is liberal and democratic.

“We urge Tim to step up and lead our party to recovery.”