Those supporting independence have support of 47% of voters, compared with 53% for No side 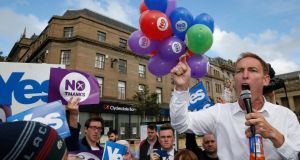 ‘Yes’ and ‘No’ campaigners listen to Labour MP Jim Murphy speak during his ‘100 Towns in 100 Days’ tour in Dundee. Photograph: Russell Cheyne/Reuters

The Scottish independence referendum is set to go down to the wire, after a major opinion poll last night reported that the gap between the sides is now at its lowest ever.

In an opinion poll for the Sun, the YouGov polling firm – which has consistently reported the lowest Yes figures – reports that those supporting independence now have the support of 47 per cent of voters, compared with 53 per cent for the No side.

The figures record a major drop in support for the No campaign. In YouGov’s previous poll, the No side had 62 per cent of the vote and the Yes side 39 per cent.

The figures have created much concern in the No campaign, which has struggled to regain momentum following last week’s TV debate between Labour’s Alistair Darling and the Scottish National Party leader Alex Salmond.

“Until one month ago, the No campaign held a steady lead of at least 16 points. It has now collapsed to just six. When I first saw the results, I wanted to make sure this movement was real. It is.”

Meanwhile, the campaigning continues amid increasing rancour between the two sides. Former Labour minister Jim Murphy is to resume his street soap-box appearances following a deferment last week because of barracking from pro-independence supporters

Early events in the tour attracted little opposition, but appearances in Motherwell and elsewhere last week drew groups of independence campaigners, with one throwing an egg at Mr Murphy.

Mr Murphy claimed that some pro-union voters were being intimidated by the conduct, and suspended his tour for 72 hours. He demanded assurances from the Yes Scotland campaign group that there would be no more protests. However, there is undisguised fury in the Yes campaign, which insists Mr Murphy has exaggerated the scale of the protests to portray independence campaigners as violent.

The temperature in the debate has increased markedly in recent days, although the number of violent incidents – including an assault on a pregnant Yes supporter – have been few.

Nevertheless, the pro-union Better Together campaign has urged Police Scotland to ensure every polling station is manned by officers to ensure that trouble is avoided.