British singer Cliff Richard performing on stage in Amsterdam, Netherlands. The BBC and police have faced questions today about the reporting of a raid on his home in connection with an alleged historic sexual offence. Photograph: Ferdy Damman/EPA. 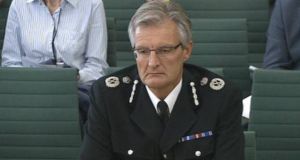 The chief constable of an English police force has apologised to pop star Sir Cliff Richard if the force was “insensitive” about the search of his home.

David Crompton, of South Yorkshire Police, told the British Home Affairs Select Committee that his inquiry had been “fatally compromised” by a claimed leak of information from Scotland Yard to the BBC, leading his force to make a deal with the broadcaster.

A crew was outside the gated Berkshire development where Sir Cliff has a penthouse apartment before police on the day of the search last month. The search related to an alleged historical offence of sexual assault in Sheffield, which Sir Cliff denies any involvement in.

Mr Crompton said: “We had a job to do but I do apologise to Sir Cliff if we were insensitive about the way that we did that. We had a job to do, and we have an investigation. The problem is that investigation could never be done in a low-profile way because it was fatally compromised from the outset.”

During questioning by the committee, Mr Crompton said that the BBC had approached his force with detailed information about their inquiry, and staff were convinced that the broadcaster would run a story without some kind of deal.

“We were placed in a very difficult position because of the original leak and the BBC came to us knowing everything that we knew, as far as the investigation was concerned,” he said.

“My concern was that if we showed the BBC the door, the very clear impression which had been left with my staff in the media department was that they were likely to publish the story. That would have impeded our investigation.

“I’m confident that we made the right decision in difficult and unusual circumstances.”

Chairman of the committee Keith Vaz put it to the senior officer that the broadcaster had blackmailed him, but Mr Crompton replied: “Blackmail is a very strong word. It put us in a very difficult position.”

South Yorkshire Police has already complained to the BBC about its coverage of the search of Sir Cliff’s Berkshire penthouse last month, claiming that an analysis piece posted on the broadcaster’s website was an attempt to distance itself from what had happened.

The police chief admitted he did not go to BBC senior management to ask them not to run the story - but added there were examples given during the Leveson inquiry into culture, practice and ethics of the press in which journalists had ignored such requests.

He said: “I did not really have that much faith that we could trust it wouldn’t be published.

“You only have to look at Leveson to find a number of examples that were core to that particular inquiry where the media decided to publish anyway. That was something very much in my mind.”

Mr Crompton argued the analysis piece on the BBC website had given the false impression South Yorkshire Police had worked with the media outlet to generate publicity for the force.

However, Mr Vaz said BBC director of news and current affairs James Harding has claimed the police chief has text messages and emails in his possession that would disprove this argument.

The committee has written to Sir Cliff to ask him what he knew of the police operation, and will publish his reply today, Mr Vaz said.

In a subsequent evidence session, BBC director general Lord Hall told the Committee: “Had the chief constable come to a news editor, head of news gathering, James Harding, director of news or myself and said to us ‘if you run this story you will hamper this investigation, it would be damaging to this investigation’ we would not have run the story.

“I want you to be absolutely clear about that. We would not have run the story.”

Lord Hall said reporter Dan Johnson went to South Yorkshire Police to discuss “a number of stories”and had a tip off from a source which he will not reveal referring to Cliff Richard. Lord Hall said there was “no hint in any of that of us knowing any more than the name Cliff Richard”.