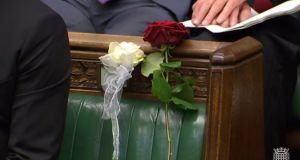 A screengrab taken from the UK parliamentary recording unit (PRU) shows single red and white roses placed on the empty seat where murdered MP Jo Cox used to sit in the House of Commons, during a special session where members of parliament had the opportunity to pay tribute to their late colleague, on June 20th, 2016 in London. Photograph: PRU/AFP Photo/Getty Images

Politics paused in Britain on Monday as colleagues from all parties paid tribute to murdered Labour MP Jo Cox in a special sitting of the House of Commons, during which some MPs were in tears.

Labour leader Jeremy Corbyn led the tributes, describing Ms Cox as “one of the very best” MPs, who had been murdered while she was doing her job by serving the people who represented her.

“The horrific act that took Jo from us was an attack on democracy, and our whole country has been shocked and saddened by it,” Mr Corbyn said. “But in the days since, the country has also learned something of the extraordinary humanity and compassion that drove her political activism and beliefs.

All MPs wore a white rose, the symbol of Yorkshire, as a mark of respect for Ms Cox, whose husband Brendan and their two children were in the public gallery. A red rose stood in the place where she used to sit in the chamber.

David Cameron praised Ms Cox’s role in drawing attention to conflicts in Sudan and the Democratic Republic of Congo and in supporting refugees fleeing Syria. He described her as a passionate campaigner whose determination to fight for justice helped to drive issues up the political agenda.

Speaking on behalf of the Northern Ireland parties at Westminster, the DUP’s Nigel Dodds said her life should not be defined by its end but by how she had lived.

“We in Northern Ireland, on all sides and in all parties, who have direct and personal experience of murderous attacks and have indeed lost friends and dear colleagues to men of violence, have felt the pain and anguish that those close to Jo are going through now,” Mr Dodds said. “Our hearts go out to them and our thoughts are with them.”

While the parties at Westminster united to mourn Ms Cox, Ukip leader Nigel Farage accused Mr Cameron of politicising her murder to gain advantage in the campaign.

Mr Farage said the prime minister was seeking to conflate the motives of the person who killed Ms Cox with those of the campaign to leave the EU.

“I think there are Remain camp supporters out there who are using this to try to give the impression that this isolated, horrific incident is somehow linked to arguments that have been made by myself or Michael Gove or anybody else in this campaign, and frankly that is wrong,” he told LBC Radio.

The Remain campaign received a boost on Monday when the former Conservative Party chair Sayeeda Warsi said she had abandoned her support for Brexit and now wanted Britain to remain in the EU.

Baroness Warsi said she could no longer support the Leave campaign because of its focus on immigration and false claims about the likelihood of Turkey joining the union.

“Unfortunately, what we are seeing as a vision for Britain are lies and xenophobic campaigning,” she said.

“Why is it people like me, who are instinctively Eurosceptic, are feeling they need to leave Leave?” Baroness Warsi said. “Because day after day, what are we hearing? The refugees are coming, the rapists are coming, the Turks are coming.”

In another setback for Vote Leave, board member Arabella Arkwright resigned on Monday after it emerged that she retweeted anti-Muslim material, including an image of a white girl in the middle of a group of people wearing burqas saying: “Britain 2050: why didn’t you stop them Grandad?”