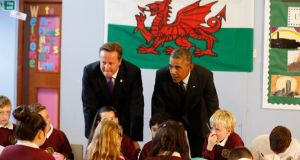 Members of the North Atlantic Treaty Organisation (Nato) must spend more on defence to send “a powerful message” to enemies, US president Barack Obama and British prime minister David Cameron have said.

The Nato summit in Newport in South Wales is a defining moment for the organisation, the two men write in an opinion article published today by The Times of London.

Urging support for Ukraine, they said Russia is “trying to force a sovereign state to abandon its right to democracy and determining the course of its future at the barrel of a gun.”

“Nato must keep military forces permanently in Eastern Europe to reassure countries nervous of Russian might and to make clear to Moscow that Nato will honour its defence obligations.”

However, Nato countries are not spending enough to defend themselves: “Britain and America are two of only four Nato members to meet the target of spending 2 per cent of our GDP on defence.”

“Other states must urgently step up their efforts to meet this too. This would send a powerful message to those that threaten us that our collective resolve is as strong as ever,” they declare.

Mr Cameron and Mr Obama will meet this morning with German chancellor, Angela Merkel, the Italian premier, Matteo Renzi, along with the Ukrainian president, Petro Poroshenko.

Sixty countries will be represented at the two-day meeting. Minister for Defence Simon Coveney will be present for this afternoon’s session involving non-Nato states.

Nato’s reason for existence was questioned after the ending of the Cold War, but it is clear that it is needed now more than ever in its history.

“We meet at a time when the world faces many dangerous and evolving challenges,” said Mr Cameron and Mr Obama, who will this morning visit a South Wales primary school.

“To the east, Russia has ripped up the rulebook with its illegal, self-declared annexation of Crimea and its troops on Ukrainian soil threatening and undermining a sovereign nation state.”

“To the South, there is an arc of instability that spreads from North Africa and the Sahel, to the Middle East,” they said, adding that new technologies have given terrorists power once held only by states.

“The utterly despicable murders of two American journalists by ISIL [Islamic State] are but the latest evidence of a brutal and poisonous extremism that murders indiscriminately and risks exporting terrorism abroad,” they said.

Faced with the challenges that exist, states cannot step back and become isolationist because they “misunderstand the nature of security in the 21st century”.

Developments abroad threaten security at home: “Nato is not just an alliance of friends who come to the aid of each other in times of need, it is also an alliance based on national self-interest.”

“So we have a real stake in making sure they grow up in a world where schoolgirls are not kidnapped, women are not raped in conflict and families aren’t slaughtered because of their faith or political beliefs.”

The latest strand of extremist Islam - ISIL must, and will be confronted: “If terrorists think we will weaken in the face of their threats they could not be more wrong.”

“Countries like Britain and America will not be cowed by barbaric killers,” they declared, adding that “a world of greater freedom” helps to keep their own peoples safe.