No prosecution of Nigella Lawson over cocaine use 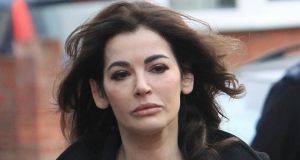 Television cook Nigella Lawson will not be prosecuted for cocaine use, despite admitting during a trial of two of former staff last December that she had taken the Class A drug, the Metropolitan Police has said.

During the trial of Elisabetta and Francesca Grillo, who were eventually acquitted on charges that they had been involved in a £500,000 fraud, Lawson said she had taken cocaine with her late husband, John Diamond during his terminal illness.

She said that she taken the drug subsequently in June 2010 when she claimed that she was faced with “intimate terrorism” by her former husband, Charles Saatchi – who she divorced after he was pictured with his hands around her neck at a London restaurant.

‘No further actions’
Her admissions at Isleworth Crown Court, during two days in the witness box, prompted a review by the Metropolitan Police, but it declared yesterday that “no further action” would be taken.

“The decision has been taken based on a number of factors, including the need for police action to be proportionate, whether further action would be in the public interest, and after consultation with the Crown Prosecution Service.

“Whilst witnesses clearly cannot simply admit to any offence under oath without consequences, this has to be balanced with the requirement for victims and witnesses to tell the truth. Further police activity may deter victims from being candid with police and in court for fear of future investigation,” said the Metropolitan Police.