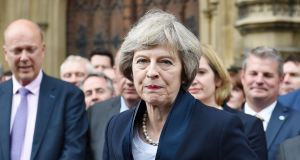 Theresa May has become Britain’s prime minister through the ingenious ruse of not being a shambles. Conservative MPs failed to see the stuff of leadership in Boris Johnson’s student banter. His faithless Iago, Michael Gove, confessed his own inadequacy for the highest office until colleagues took him at his word. Finally, yesterday, Andrea Leadsom, who had exchanged obscurity for infamy with some uncharitable insinuations about childless women, left the party and the nation to the outgoing home secretary.

In the Bizarro World of British politics, a country that voted to leave the EU will now be led by someone who wanted to stay. No prominent Leaver has survived more than a week or two of serious examination. Given their sanguine certainty about the consequences of exit, it is magnanimous of them to let others govern the beatific Shangri-La that is surely around the corner.

This optimism assumes a lot about an inscrutable politician. May is the most seasoned new prime minister since Jim Callaghan in 1976, and somehow a mystery at the same time. Colleagues know as much about her as a Londoner might know about a neighbour. All we can do is assemble clues – and for a liberal voter, or just a pragmatist who thinks a country with 5 per cent unemployment has no screaming need to discard its open economic model, the clues are disconcerting.

Although May began her career in finance, she has never had a business-facing job in politics. Before her eight-year immersion in the home affairs brief, which can make a curtain-twitcher of any libertine, she held portfolios for transport, culture, the environment, work and pensions, the family, education and women, as well as the Tory chair. This amounts to a tour of nearly every function of state except oversight of the economy.

The gap in her experience is neither her fault nor proof that she has been conditioned to view the anarchic workings of enterprise as menaces to be contained by paternalist government. But then the clues do not end there. It is some feat to say things about migrants that make nativist Tories feel queasy. May has done it twice in nine months, in a party conference speech last autumn and more recently in her hesitation to guarantee the status of EU nationals already in Britain.

Her tensest relationship as home secretary was with the treasury, which viewed some of her curbs on migrants – foreign students, in particular – as tantamount to burning money. Atop her leadership campaign, and therefore destined for an eminent place in her cabinet, is Chris Grayling, whose work as justice secretary was mainly notable for the alacrity with which his immediate successor, Gove, undid it.

Businesses that assume a nominal Remainer will try to keep Britain in the single market or thereabouts should study her remarks of late, none of which makes that a priority. They might also consider her criticism of executives for failing to delight in the “opportunities withdrawal presents”, her plan to tilt corporate boards towards employees and her weakness for that nebulous, indestructible piety of British politics, a “proper industrial strategy”.

Ed Miliband led the Labour Party into last year’s general election with a similar mission to make capitalism a bit nicer without forfeiting any of its dynamism, as if nobody had ever tried before. And even he offered business the security of his commitment to Europe.

Some or all of May’s ideas may be what the public wants. But for that slice of the political class that saw EU exit as the door to a looser, more competitive economy, this was never the plan.

As he clutched his second Wimbledon trophy on Sunday, Andy Murray saluted David Cameron, the outgoing prime minister, as the doer of an “impossible job”. May has only won the right to choose whose hearts to break. Free-marketeers, gird yourselves.