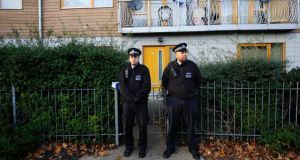 Police stand guard in front of a property in Brixton, south London. Two people who allegedly held three women as slaves in their south London home for more than 30 years had been arrested previously in the 1970s, but did not say why. Photograph: EPA/Facundo Arrizabalaga

Peckford Place, just a few minutes’ walk from the bustling centre of Brixton, is a neighbourhood where people live often for years knowing little about those next door, other than a first name, perhaps, or a habit noticed.

Once barely known in the borough, Peckford Place has become internationally known since police said that three women – one Irish (57), one Malaysian (69) and a Briton (30), had been held there for decades in slave-like conditions.

Four days in, the affair is riddled, if not with contradictions, then certainly with oddities. The five lived in a downstairs flat in a three-storey terraced block, with a busy road on one side and a pedestrian square on the other. Peckford Place has its merits, but privacy is not one of them.

However, that is exactly the point, says home secretary Theresa May. The reality of modern-day slavery is that it is “all around us, hidden in plain sight . . . supplying shops and supermarkets, working in fields, factories or nail bars, trapped in brothels or cowering behind curtains in an ordinary street”.

“It’s like the press are doing the house-to-house inquiries, not the police,” said one source wryly. Yesterday afternoon, two civilian-dressed detectives could be seen knocking on doors.

The Indian man and his Tanzanian-born wife were arrested at 7.30am on Thursday morning. During the course of the day, police took out 50 bags of evidence from the property.

One neighbour, Marius Feneck, who lives two floors up in the property that was built eight or nine years ago, claimed the youngest woman had fallen for him and would “stand outside the flat and talk to me for hours”.

The alleged infatuation had gone on for seven years. Feneck’s girlfriend, Rachael Price (25), knew about it, telling the Sunday Express that the woman had dropped scented letters into their letter box as she walked past.

Photos published
Over the weekend, photographs of the young woman which Feneck had were published. In one, the woman, known as Rosie, is seen sitting on a chair, demurely looking down with her hands clasped together.

The publication of the photograph – even if her face was pixelated and thus unrecognisable – was “disappointing”, Aneeta Prem, the founder of the Freedom Charity told The Irish Times yesterday.

Now collecting statements from neighbours, the Metropolitan Police are satisfied that she, the Irish woman and the Malaysian woman lived with “invisible handcuffs”, unable to leave and forced into domestic servitude.

So far, the police have found a birth certificate for the youngest woman. Intelligent and literate, it is not yet known if she went to school, although it could become a most important fact in the case.

If she did go to school, then Lambeth Council will face increasingly difficult questions about what they knew about the three, along with the couple they shared the flat with, and whether signals that could have ended years of suffering earlier were ignored.

The police believe the Irishwoman and the Malaysian woman first came into contact with the Indian man in the late 1970s when all of them lived in “a collective”, together with others of the same “shared political ideology”.

Collective ended
“Somehow that collective came to an end and the women ended up continuing to live with the suspects. How this resulted in the women living in this way for over 30 years is what are seeking to establish,” says Commander Steve Rodhouse, of the Metropolitan Police, who heads the force’s organised crime and gangs unit.

“But we believe emotional and physical abuse has been a feature of all the victims’ lives.”