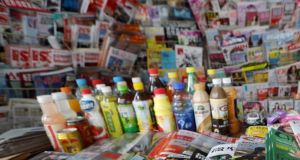 The Sunday Mirror today became the latest newspaper title to be dragged into the ongoing phone-hacking scandal. Photographer: Tomohiro Ohsumi/Bloomberg

The Sunday Mirror was dragged into the UK phone-hacking scandal today as London police arrested four journalists connected to the newspaper.

The Metropolitan Police Service said it arrested three men and a woman who either currently or previously worked at Mirror Group publications.

The investigation is focusing on activities at the Sunday Mirror in 2003 and 2004, the MPS said in a statement.

The four people arrested were bailed to return to various London police stations on dates in April.

James Scott, the editor of Trinity Mirror's People tabloid and his deputy, Nick Buckley, were among those arrested, the London-based company said. At least 36 people have been arrested in phone-hacking probes that have centered on News Corp. 's now defunct News of the World tabloid.

News Corp chairman Rupert Murdoch closed the newspaper in 2011 in response to public anger over reports that journalists had listened to voice-mail messages on a murdered school girl's mobile phone.

"We take any allegation against employees very seriously and are cooperating with the police on this matter," Trinity Mirror said in a statement.

Neither Scott nor Buckley were in the office today and weren't available to answer calls.

It's not the first time Trinity Mirror has been linked to the phone-hacking scandal. A former reporter at the Daily Mirror was arrested in July and the company was sued in October by former England soccer manager Sven-Goran Eriksson and actor Shobna Gulati.

Piers Morgan, who edited the Daily Mirror between 1995 and 2004 and now hosts a CNN program, told the Leveson ethics inquiry triggered by the News Corp scandal that phone hacking didn't take place at the newspaper while he was there.

A former Daily Mirror reporter later testified to the same inquiry that hacking happened on a daily basis among the newspaper's show-business reporters. The Daily Mirror is the second-most popular national morning newspaper in the UK behind The Sun with an average circulation of 1.04 million, according to the UK Audit Bureau of Circulation.

The Sunday Mirror is the third-most-popular Sunday edition with 1.05 million copies, behind The Sun and The Mail on Sunday.

Rebekah Brooks and Andy Coulson, former lead editors of the News of the World, are among eight former News Corp. journalists and a private investigator who were charged in July with conspiring to intercept voice mail to get stories.

Police in February began a new investigation into phone hacking at the News of the World's features desk and arrested six more people who worked at the tabloid, once the country's largest publication.