Minister dismisses ‘having cake and eating it’ Brexit notes 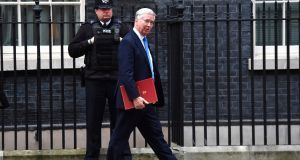 Brexit minister David Davis: Donald Tusk, EC president, said it was illusion for anyone to think they could have the EU cake and eat it. “I propose a simple experiment. Buy a cake, eat it, and see if it is still there on the plate.” Photograph: Ben Stansall/AFP/Getty Images

When it comes to the Brexit negotiations, “having cake and eating it” is not the official policy, a cabinet minister has said, in reference to a handwritten document photographed outside Downing Street that said the government was pursuing such a strategy.

The government has sought to distance itself from the notes photographed as they were carried by an aide to the Conservative vice-chair, Mark Field, which said Britain will not be able to stay in the single market and will not seek a transitional deal after leaving the EU.

The business secretary, Greg Clark, said he did not recognise the claims in the notes, which also said the “French are likely to be most difficult” in the negotiations. “I was interested and amused to see it because it doesn’t reflect any of the conversations that I’ve been part of in Downing Street,” he told BBC Radio 4’s Today programme.

“I don’t know what the provenance of that note is. All I can say is that it is going to be a negotiation which has to be serious, we have to get our negotiating mandate in place but this is being done soberly and meticulously. It would be nice to have [cake and eat it] but it’s not the policy.”

Downing Street said the notes were not written by a government official and did not reflect its official position.

“These individual notes do not belong to a government official or a special adviser,” a No 10 spokesman said. “They do not reflect the government’s position in relation to Brexit negotiations.”

Mr Field does not work with the department for exiting the EU directly but, as MP for the Cities of London and Westminster, he has large numbers of constituents working in financial services. He is believed to have been in a meeting at the department, which is headed by the Brexit secretary, David Davis.

Mr Field’s role as vice-chairman (international) of the Conservative party also includes liaising with Conservative MEPs and with sister centre-right parties in Europe.

The notes said: “What’s the model? Have your cake and eat it” and cites an ideal deal as a “Canada-plus” option, the free trade deal hammered out over seven years with Ottawa.

The memo also said: “Transitional – loath to do it. Whitehall will hold on to it. We need to bring an end to negotiations.” The reference to the civil service suggests the notes were taken in a meeting with a minister, rather than with Whitehall officials from the department.

This week the governor of the Bank of England, Mark Carney, urged the government to seek a transitional deal to try to smooth out the process of leaving the EU.

Officials in Brussels played down the significance of the handwritten note, saying they did not see it as official British policy. One source said it was normal that governments started with a maximalist scenario when embarking on any negotiation.

But he added: “Do they really think they can get this? That for the UK is the worrying part.” Some British politicians had shown an “absurd lack of knowledge” about how the EU works, he said, referring to statements by Davis, before he became Brexit minister, that Britain could sign trade deals with Germany – legally impossible under EU law.

“To have your cake and eat it” (or “avoir le beurre et l’argent du beurre” in French), has become a familiar reference in Brexit talks, ever since Boris Johnson popularised it during the leave campaign as his preferred strategy. In a barb aimed at the British foreign secretary, Donald Tusk, the European Council president, criticised proponents of the “cake philosophy”.

Speaking last month, he said it was pure illusion for anyone to think they could have the EU cake and eat it. “To all who believe in it, I propose a simple experiment. Buy a cake, eat it, and see if it is still there on the plate.”

Sources also dismissed the idea that France would be “the most difficult” country in the Brexit negotiations. “Everyone is on exactly the same page,” a European diplomat said, referring to EU leader statements agreed in June and September. “If there is no freedom of movement, there can be no access to the single market.”

The photographed note could be a talking point during the breaks of a meeting on Tuesday on Britain’s EU exit led by the EU’s chief Brexit negotiator, Michel Barnier. He is running “a half-day technical seminar” with officials from EU member states, excluding the UK, where he will answer questions and map out the big issues for Brexit talks.

The note, which was carried into Downing Street by Julia Dockerill, Field’s chief of staff, suggests a deal on manufacturing with the EU should be “relatively straightforward” but admits that services, such as in the financial or legal sectors, are harder, because of the desire from Paris to snatch more business for France.

Other comments, which filled a full A4 page of a notebook, included: “Difficult on article 50 implementation – Barnier wants to see what deal looks like first.”

In reference to Britain remaining a member of the European Economic Area, like Norway, the note says: “Why no Norway – two elements – no ECJ [European Court of Justice] intervention. Unlikely to do internal market.”

Leave supporters in the government are sceptical about a Norway model, where a country remains in the single market, but also accepts free movement of people – the reference to the internal market – and is under the jurisdiction of the European court.

Stephen Gethins, the Scottish National Party spokesman on Europe, said the notes revealed a government “with no direction, and no clue”.

“Worryingly, those in favour of taking us out of the EU appear set to cut off their nose to spite their face – with an apparent call to end any negotiations with Europe before they’ve properly begun and already wishing to pull the plug on the prospect of transitional arrangements,” he said.