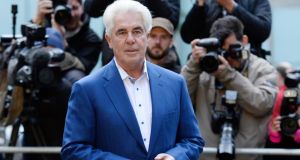 British celebrity publicist Max Clifford arrives to Southwark Crown court in London, this morning. Mr Clifford is on trial accused of a string of sex offences against children and young women. The jury has retired to consider its verdict. Facundo Arrizabalaga/EPA

Jurors have resumed their deliberations in the trial of publicist Max Clifford who is accused of a string of indecent assaults.

The 71-year-old celebrity agent faces 11 indecent assault charges against seven alleged victims — all of which he denies.

Prosecutor Rosina Cottage QC told the jury at London’s Southwark Crown Court that Clifford was a “master in the art of intimidation”, using his celebrity connections to “bully and manipulate” girls and young women into sex acts over a period of nearly 20 years.

The PR consultant treated his office as his own “sexual fiefdom” and “playground”, taking “what he wanted when he wanted”, she said.

Mr Clifford told the jury of six men and five women that the allegations against him were “a load of lies” as he accused the alleged victims of being “fantasists and opportunists”.

The alleged offences are said to have taken place between 1966 and 1984 — before Mr Clifford found widespread fame with his links to tabloid stories including The Sun’s Freddie Starr Ate My Hamster front page, the court heard.

The alleged assaults are said to have happened in cars, and at his New Bond Street offices in central London, jurors have been told.

On some occasions Mr Clifford told the girls to take off their clothes; on others, he made them perform sex acts on him; and on some, he forced himself on them, it is alleged.

The women — who do not know each other — came forward to police in the wake of the Jimmy Savile scandal, the court heard.

A number of other witnesses — who are not complainants in the case — also made allegations against Mr Clifford, including one woman who claimed she was just 12 when she was assaulted by the publicist while in a jacuzzi in Spain.

The alleged incident, said to have happened in 1983, could not be included in the charges as it took place abroad, the jury heard.

During the six-week trial, the court has heard claims that Clifford has a “micro-penis” measuring two-and-a-half inches erect, while one woman told the court the publicist’s penis was “enormous”.

A doctor measured Clifford’s penis at an “average” five-and-a-quarter inches long when flaccid, the jury has been told.

Judge Anthony Leonard QC has warned the jury to ignore other recent high-profile sex assault cases which are irrelevant to its considerations.