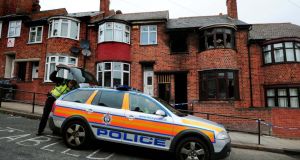 An 18-year-old man has been charged with murder in connection with a house fire which killed four members of the same family.

Leicestershire Police said the Crown Prosecution Service had authorised them to charge the man in relation to a deadly house blaze in Wood Hill, Leicester, in the early hours of Friday, September 13th.

Their father is Muhammad Taufiq Al Sattar, a Dublin-based doctor.

Steve Chappell, chief crown prosecutor at CPS East Midlands, said lawyers had decided there was sufficient evidence to charge and that it was in the public interest for a prosecution to take place.

The man will appear at Leicester Magistrates’ Court tomorrow.

Detectives have been exploring the possibility that a family of four killed in a fire at their property might have been targeted by mistake in a revenge attack after the death of a man in Leicester.

Antoin Akpom died following an assault that took place in Kent Street on the evening of September 12th.