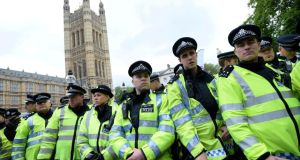 Police officers form a cordon during a demonstration held by the far-right British National Party (BNP) and a counter-demonstration by Unite Against Fascism (UAF) in central London today. Photograph: Dylan Martinez/Reuters 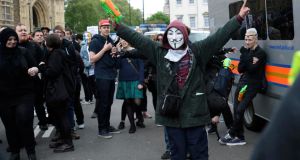 A man gestures while supporting a Unite Against Fascism (UAF) counter-demonstration to another one held by the far-right British National Party (BNP) against the killing of a British soldier, in central London today. Photograph: Dylan Martinez/Reuters 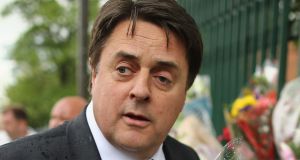 Police intervened to separate about 150 far-right protesters from a much larger anti-racism crowd in London today to stop them from coming to blows over the killing of a British soldier on a busy street last week.

A number of protests and counter-protests have taken place in the wake of the May 22nd killing of Lee Rigby, a serving soldier and veteran of the war in Afghanistan, which the authorities are treating as a terrorist incident.

Michael Adebowale and Michael Adebolajo are now in custody on suspicion of killing Rigby.

Mr Adebowale has been charged with murder and possession of a firearm. Small but noisy far-right groups have taken to the streets several times since Rigby’s killing to express anti-Muslim views.

Their actions have been widely condemned and police, politicians and religious leaders have appealed for calm.

The protest by the far-right British National Party (BNP) near the Houses of Parliament was dwarfed by a counter-demonstration by a group called Unite Against Fascism (UAF).

The BNP protesters held placards with the slogan “Hate preachers out”, a reference to radical Muslim clerics they say should be deported from Britain. The UAF banners had slogans like “Free hugs”, “Nazis out” and “Jobs and homes not racism”.

Witnesses said there were some minor scuffles and they saw one man with a bloody nose, but police intervened quickly to keep the two sides apart. Police said some of the UAF protesters refused to remain in their designated penned area and 20 were arrested.

The BNP originally wanted to march through Woolwich, the neighbourhood in southeast London where Rigby was killed, but the police banned them from the area because it could have resulted in “ugly scenes on our streets”.

Another far-right group, the English Defence League (EDL), skirmished with police in Woolwich on the night of the killing and mustered about 1,000 protesters in central London on May 27th to chant slogans like “Muslim killers off our streets”.

Rigby’s family issued a statement yesterday saying his death should not be used as a pretext for reprisal attacks against Muslims.

Today, the Daily Mirror newspaper published a letter entitled “Hope not Hate”, signed by 33,000 people including Ed Miliband, the leader of the opposition Labour Party.