Leave campaign’s claims NHS would do better after exit are false, says Corbyn 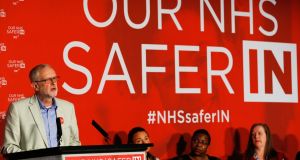 Jeremy Corbyn speaks at a Remain event at the headquarters of the Trades Union Congress in London yesterday. Photograph: Luke MacGregor/Bloomberg

Mr Corbyn was speaking during a campaign event in London with his entire shadow cabinet and top union leaders, amid growing doubts about the party’s ability to persuade its supporters to vote Remain.

“A vote to leave is a vote to put the NHS in jeopardy and in the hands of those who want to break it up. Nigel Farage and Boris Johnson are wolves in sheep’s clothing, using concern about the NHS to mask their real agenda,” he said.

With three of the four latest polls showing Leave ahead by between eight and 10 points, Labour canvassers report a major shift towards Leave among its working-class supporters in some parts of England. For the second successive day of the campaign, David Cameron stepped back to allow Labour to take centre stage in an effort to connect with Labour voters left cold by the internal Conservative argument over the EU.

Frances O’Grady, general secretary of the Trade Union Congress (TUC), described the Leave campaign leaders as “fibbers, fakes and phonies” posing as champions of the NHS.

“Let’s be honest, they love the NHS in the way that Dracula loves a blood bank. Does anyone really believe that Boris Johnson cares about the NHS? The same Boris Johnson who is on record as saying he doesn’t believe in a free NHS; and that if people paid for services, they would value them more,” she said.

Vote Leave yesterday said that leaving the EU would free up £100 million a week in extra funds for the NHS. And the campaign claimed it could maintain funding after Brexit to all those, such as farmers and scientists, who currently receive EU funds.

“There is more than enough money to ensure that those who now get funding from the EU – including universities, scientists, family farmers, regional funds, cultural organisations and others – will continue to do so while also ensuring that we save money that can be spent on our priorities,” the campaign said.

“This is fantasy economics from the Leave campaign, as quitting Europe would wreck Britain’s economy and mean cuts to spending on vital public services, as just about every economic expert has said,” he said.

The Remain campaign is stronger than Leave among voters on the economy but unhappiness about immigration is driving the drift of support towards Brexit.

Labour’s deputy leader Tom Watson said yesterday that voters needed to be reassured that the EU’s rules on free movement of people could be reformed if Britain votes to remain inside.