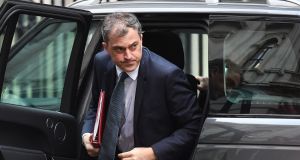 Secretary of State for Northern Ireland Julian Smith. In June 2018, a High Court judge held there was no legal obligation on the Northern Secretary to have a defined criteria in place for holding a border poll. Photograph: Justin Tallis/AFP via Getty Images

The British government has unlawfully failed to put in place a policy for holding a border poll in Northern Ireland, the British Court of Appeal heard on Thursday.

Lawyers for a victims campaigner claimed the current criteria for calling a referendum on the question of Irish unity lacks transparency.

Raymond McCord is challenging a ruling that it should be left to the Secretary of State for Northern Ireland to make a decision on the appropriate circumstances. According to his legal team that has led to an unconstitutional situation where current secretary Julian Smith has simply opted to maintain the status quo.

Ronan Lavery QC argued that a policy is now required to bring legal certainty. “My client doesn’t want a border poll, he feels that would be destabilising,” the barrister stressed. But he set out a scenario where such a referendum would be mandatory.

“That is a matter of assessment, with empirical evidence, and whether it would be the worst thing in the world for Northern Ireland if a poll was to be held, the secretary of state is obliged to hold that if the criteria is met.”

Under the terms of the 1998 Good Friday Agreement, Mr Smith can call a vote if he believes a majority of people in the region no longer want to remain part of the United Kingdom.

In June 2018, a High Court judge held there was no legal obligation on the Northern Secretary to have a defined criteria in place.

Mr McCord, an outspoken critic of loyalist paramilitaries since a UVF gang killed his son Raymond jnr in 1997, is appealing that determination. His lawyers contended that currently no one knows what the criteria is for convening a border poll – a position they alleged is is unlawful.

As the hearing continued Mr McCord insisted his case was about helping all communities in Northern Ireland. “I am trying to take the orange and green sectarian politics and opinions out of a border poll,” he said outside court.

“I want to see a policy set in stone when such a referendum must be held, and not be left to the discretion of the secretary of state, or subject to the demands of either Sinn Féin or the DUP.”

His solicitor, Ciaran O’Hare of McIvor Farrell law firm, pointed to changing demographics and claimed Brexit has had a “profound” effect on attitudes to a united Ireland.

He added: “Right now, the people of Northern Ireland are being denied their constitutional right to self-determination.

“The decision of the Secretary of State for Northern Ireland to maintain the status quo is unconstitutional and flies in the face of the principle of self-determination and the spirit of the Good Friday Agreement.”