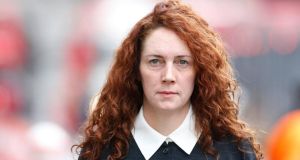 A stunt double for Angelina Jolie had her phone hacked by a private eye working for a Rupert Murdoch British tabloid to gain information about the actress’s relationship with Brad Pitt, a trial of two former editors was told today.

Eunice Huthart, who was also a good friend of the actress, was targeted by the News of the World paper in 2005 and 2006 when there was huge media interest in the Hollywood stars’ relationship, prosecutors told the Old Bailey court in London.

In other evidence, the court was told that the name of Kate Middleton, now the wife of Queen Elizabeth’s grandson Prince William, appeared on a list entitled “Target Evaluation” discovered in the house of a man who has admitted carrying out phone-hacking for the paper.

Rebekah Brooks and Andy Coulson, former editors of the News of the World, who also have close links to British prime minister David Cameron, are on trial accused of conspiracy to hack phones and other charges. Six others are also on trial and they all deny allegations against them.

The phone-hacking accusations sent shockwaves through the British establishment, led to a public inquiry into the conduct of the press, raised questions about police conduct of inquiries and forced Murdoch to close the News of the World.

The court heard today that an entry in a notebook belonging to private detective Glenn Mulcaire, who has admitted illegally tapping voicemails on mobile phones for the tabloid, contained details of Ms Huthart’s mobile phone and her voicemail PIN number.

The entry was dated July 2005. Ms Huthart was in Los Angeles where Jolie and Pitt were filming “Mr and Mrs Smith” and media speculation about their relationship was intense.

In June, Ms Huthart launched the first legal action in the United States against Murdoch’s News Corp over phone-hacking which her lawsuit said had occurred in 2004 and 2005.

Prosecutors said it was accepted that Mr Mulcaire had hacked her phone four times in early 2006 around the time Jolie publicly announced she was pregnant with Pitt’s child.

Numerous stories appeared in the News of the World during this period, when Mr Coulson was the paper’s editor and prosecutors have previously argued he must have been aware where such information came from, an accusation he rejects.

The court was also shown an entry in Mr Mulcaire’s notebook with a handwritten list of 18 names including Ms Middleton, now the Duchess of Cambridge, London mayor Boris Johnson and others who the jury have been told were alleged phone-hacking victims.

The discovery was made when Mr Mulcaire was first arrested by detectives in 2006, but no further reference to whether the duchess was actually targeted was made.

The prosecution gave details relating to the hacking of other victims including former British minister Tessa Jowell whose lawyer husband was accused by Italian authorities of corruption charges linked to ex-prime minister Silvio Berlusconi.

Phone records showed her phone was repeatedly hacked between March and July 2006, the court heard.