Dugher tweets: ‘Just been sacked by Jeremy Corbyn. I wished him a happy new year’ 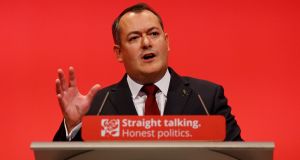 Michael Dugher who said on Tuesday Twitter that he had been ‘sacked’ by Labour leader Jeremy Corbyn as shadow culture secretary. Photograph: PA 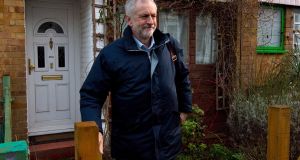 In a message on Twitter, the Barnsley East MP announced: “Just been sacked by Jeremy Corbyn. I wished him a happy new year.”

Mr Dugher, a close ally of former prime minister Gordon Brown, voted in favour of UK military action in Syria in last month’s free vote in the House of Commons. He had warned Mr Corbyn he would end up with a “politburo of seven” at the top of the party if he attempted to use a reshuffle to surround himself with allies from the Labour left.

Mr Corbyn is expected to use the first day of the Commons’ return from Christmas recess to finalise the shake-up of his top team, after late-night talks with key members of the shadow cabinet ended without any announcement on Monday.

A spokesman for Mr Corbyn said the leader had “several discussions in relation to changes to the shadow cabinet” but would not give any details of who, if anyone, was being moved or sacked.

The talks followed speculation of a possible “purge” of those with views at odds with the leader, such as shadow foreign secrretary Hilary Benn’s Commons speech in favour of RAF air strikes in Syria and shadow defence secretary Maria Eagle’s support for the renewal of the UK’s Trident nuclear deterrent.

Another nine shadow cabinet members voted for air strikes after Mr Corbyn was forced to allow a free vote — fuelling suggestions that he could replace them with left-wing supporters.

But the scope of the changes appeared increasingly likely to end up narrower than mooted, as the leadership sought to balance the desire for a coherent message on the front bench with the major backlash in the parliamentary party that would greet any move to freeze out moderates.

Just been sacked by Jeremy Corbyn. I wished him a happy new year.

Mr Dugher indicated that his sacking was linked to public comments he had made about the prospect of a “revenge reshuffle” by Mr Corbyn against those who opposed him over Syria. “Jeremy said he didn’t like things I’d been writing in defence of good colleagues and new

politics,” said the former shadow culture secretary in a message on Twitter. Mr Dugher highlighted an article in the New Statesman in which he cautioned against a reshuffle, writing: “When the Commons returns from recess, all

Labour’s energy should be focused on getting after the Tories ... Revenge is not very Jedi. It’s also not very new politics.”

A number of senior party figures expressed their dismay at the announcement in a sign of the deep divisions within Labour.

Deputy Labour leader Tom Watson described the sacked frontbencher as a “rare” and “talented” MP. He said: “Michael Dugher is a rare politician - a talented working class MP who hasn’t lost his strong Yorkshire roots. “Politicians with his ability and commitment can make a difference in any role.

Labour’s loss in the shadow cabinet will be compensated by Michael’s free thought on the backbenches. ” Former leadership contender Andy Burnham said Mr Dugher, who ran his campaign, had served the party with distinction. He said: “Michael is

Labour to the core and I have no doubt that he will continue to serve the best interests of our party in whatever way he can.

We face a big challenge in winning back the trust of our traditional supporters in the North and the Midlands and Michael is one of the authentic voices who can do that. I thank him for all the support he has given me and wish him well. “He has served

Labour with distinction and can leave the frontbench with his head held high.” Gloria De Piero, shadow minister for young people, said: “In over 20 years of friendship with Michael I have witnessed his tireless commitment and determination to campaign for a

Labour government and I know that will continue from the back benches. But it’s always sad to lose someone from an ordinary background from the shadow cabinet.”

Shadow defence minister Toby Perkins said: “Sad to hear this, always effective at putting Tories on the back foot, something we need to do more of.”

on Ashworth, shadow minister without portfolio, said: “I’ve been mates with Michael Dugher since I was 16. Sorry to hear this news. I know he will continue to campaign hard for the party he loves.”