Jazz singer and clarinettist Acker Bilk dies at age of 85

‘Stranger on the Shore’ a highlight of career spanning four decades 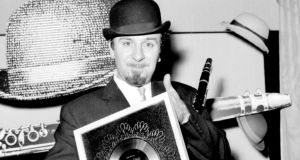 Jazz singer and clarinettist Acker Bilk has died at the age of 85, his manager said today. Bilk rose to fame on a wave of enthusiasm for trad jazz, but with his distinctive look and a batch of instantly recognisable tunes he carved out a long career.

He became a chart regular during 1960 with tunes like Summer Set and Buona Sera.

But it is his signature tune Stranger on the Shore (1961) for which the musician’s four decades in the spotlight will be best remembered.

Bilk was awarded the MBE in the New Year Honours List of 2001.