Analysis: There is a politically unmentionable calculation that Ireland is best served by the preservation of the Union 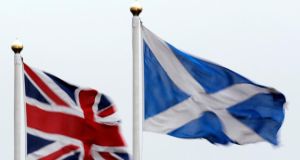 Official Ireland, in the form of governments North or South, is not in proselytising mode. At least, when it comes to Scottish independence. Nor, it appears, are our parties, even those most identified with the cause of indepenedence/unionism.

Yet, in the Republic at least, the reality is that Scottish aspirations to run their own affairs would seem to chime strongly with our own national narrative of successful independence.

At the very least one might expect a chorus from sympathetic politicians of “been there, done that”, an expression of solidarity for the legitimacy of a nationalist aspiration, and an articulation the core national value of the right of nations to self-determination.

At least, perhaps, a reassuring response and assurance out of our historical experience to the prognoses of catastrophe, of economic disaster and political isolation that have emanated from Westminster? We shared a stable currency union with sterling for 50 years, after all, and could at least argue that it was not the impossibility for Scotland that London is suggesting.

And, after all, international support has been manifest for the No camp, as Martin Mansergh has pointed out in his contribution to this series, from the likes of EU Commission president José Manuel Barroso and US president Barack Obama. But, no. Silence. Even on the part of Sinn Féin, whose past support for the Basque cause and active collaboration with Eta, would suggest the party is not averse to international solidarity activity.

In part that official silence – a public benign neutrality on the issue that masks an unstated hope that the issue will simply go away– might be excused as deference to the idea that “self-determination” is a private matter for the “self”, without outside help. Historical parallels, as Mansergh points out can be exaggerated, and there is also an important, politically unmentionable, calculation that Ireland is better served by the preservation of the Union.

The political fallout from the breakup of the UK is of as much concern to Dublin as the prospect that an independent Scotland could become a poll of attraction for foreign direct investment. Already nervous about the possibility of a British break from the EU, there is a strong sense that a Scottish go-it-alone would accelerate the process first by changing the Westminster political maths, making an anti-referendum Labour government less likely. And then, by eroding what has been seen until recent times as a pro-EU majority in the UK.

And “official Ireland”, Mansergh observes, attaches “much more importance to the cordiality of British-Irish relations and the stability of the peace process”. Although a Yes vote might provide a brief fillip to Sinn Féin by again raising the salience of the idea of a united Ireland, few imagine it would win any Northern unionists to the idea. On the contrary it might well make them feel less secure about their position in a United Kingdom.

The more likely outcome of the referendum, as Arthur Aughey argued here yesterday, is a No vote and “one delicious irony” the reconsolidation of the political legitimacy of the United Kingdom as a state. The Irish national interest lies, it could be argued, in neither a Yes nor a No vote, but no vote or campaign at all.

In the North a collective official view would clearly be impossible. The Executive is deeply divided on desirability of independence.

Sinn Féin and the DUP might welcome/abhor in equal measure either result but neither side in the debate in Scotland would particularly welcome public support from either quarter.

There are reports that Orange members and bands from the North will join their Scottish counterparts’ September pre-referendum march in Glasgow, but the Order’s contribution has been dismissed by the mainstream unionist Better Together campaign.

A leading unionist campaigner, Jim Murphy MP, former Labour Scottish secretary, describes them as “unsavoury” insisting that “not for a moment would they be part of the Better Together campaign. They’d be unwelcome”.

Yet if the Yes/No debate is producing little resonance in the North’s politics, the reshaping of Scotland’s devolution deal with Westminster in the wake of a likely No will certainly prompt agonising in Belfast. With all the Scottish unionist parties offering forms of enhanced devolution as their alternative to a Yes vote, as Aughey argues, the most important effect of the the referendum is to stimulate a serious “reflection on what the historian Colin Kidd has called ‘the vast and variegated middle ground’ between centralisation and independence”. And not least, inevitably, in Belfast.

The Tories have suggested that Scotland’s parliament should become responsible for setting rates and bands of income tax as well as supplementing welfare benefits. Intuitively one might expect Northern Ireland’s devolved administration to say “we’ll have some of that too, please”. But, as Northern politicians have discovered with the suggested devolution of the right to vary rates of corporation tax to compete with the Republic, Westminster is unlikely to accede without insisting that the local administration must also arrange to meet any resulting local revenue shortfall from their own resources. By cuts to services, or increased local taxes, politically toxic choices.

That reality puts a different, difficult complexion on the calculation of the benefits of greater local autonomy. Scotland’s referendum, it seems is raising more than a few challenging, and counterintuitive, conundrums for this island’s political class.

Patrick Smyth is Foreign Policy Editor of The Irish Times