Colm keena was at a polling station in Dundee as Scotland casts its vote. Video: Colm Keena 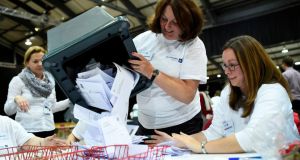 A ballot box is emptied as workers prepare to count ballots at a counting centre in Aberdeen. Photograph: Dylan Martinez/Reuters 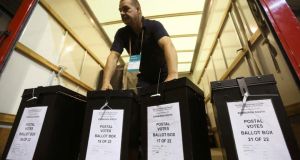 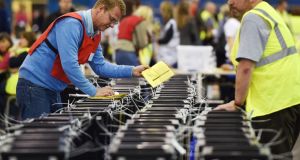 Ballots are brought into the Royal Highland Centre during the Scottish referendum in Edinburgh. Photograph: Andy Rain/EPA

Counting will continue through the morning in Scotland’s historic referendum on whether the country should remain part of the United Kingdom.

A poll taken by YouGov after people voted last night has predicted a victory for No by 54 per cent to 46 per cent for Yes. The survey involved 1,828 people after they voted today, together with the postal votes of 800 people, and was not a traditional exit poll.

Polling stations opened at 7am and closed at 10pm, with the result expected to be known by breakfast time today. The question facing voters is a simple one: Should Scotland be an independent country?

The turnout is expected to be high, with 4,285,323 people registered to vote, according to the Electoral Commission, and 16- and 17-year-olds able to take part for the first time. Some predictions suggest turnout could be as high as 90 per cent.

Mr Salmond gave both women a soft Yes toy as a mascot for their vote and the trio stopped for pictures on their way into the polling station.

Despite long days of campaigning, Mr Salmond said he managed to get a good rest on the eve of the vote.

“I got a fantastic night’s sleep, obviously there’s a great deal of anticipation, it’s a once-in-a-lifetime opportunity, it’s a day that everybody will remember,” he said.

“Natasha and Lea are voting for the first time and so will so many people in Scotland, not just 16 and 17-year-olds, but people in their 30s, 40s and 50s.

Better Together leader Alistair Darling was greeted by a mixture of cheers and boos as he arrived at the Church Hill Theatre in Edinburgh to cast his vote.

“I’m feeling very confident,” he said. “It’s been a long, hard two-and-a-half year campaign, passions have been aroused on both sides, and understandably so because we are talking about the biggest single decision that any of us will ever take in our lifetime.

“But I’m increasingly confident that we will win tonight.”

He added: “This is the biggest decision that any of us in Scotland will ever take. The future of our country is at stake. There is no going back.”

The crucial ballot, which could see the 307-year-old union between Scotland and England brought to an end, is expected to go down to the wire, with polls showing the contest is too close to call.

An earlier YouGov survey for the Sun and the London Times and a separate poll by Panelbase both found 52 per cent of Scots will to vote to stay in the union, with 48 per cent favouring independence, when undecided voters are excluded.

But research by Ipsos-Mori for the broadcaster STV suggested the gap could be even closer, indicating 51 per cent of people will vote No to 49 per cent saying Yes.

When Scotland’s 2,608 polling places close at 10pm the sealed boxes containing the ballot papers will be collected and transported to each local authority’s designated count venue — in most cases a school, sports centre or town hall.

The number of ballot papers in each box will be counted by a 5,767-strong counting team and the total will be reported to the chief counting officer (CCO) who will authorise the local counting officer to announce the turnout.

After reporting to the CCO, each local authority will announce its result, with the first declaration expected at around 1.30am and the last at around 6am.

Chief Counting Officer Mary Pitcaithly will announce the will of the nation at the Royal Highland Centre outside Edinburgh tomorrow morning.