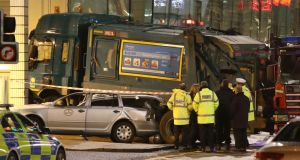 File photograph of the scene in Glasgow’s George Square after a bin lorry crashed in the city centre and killed six people. Photograph: PA

The driver of the bin lorry that crashed in Glasgow killing six people has refused to answer a series of questions at the fatal accident inquiry into the tragedy.

Harry Clarke (58) began giving evidence at Glasgow Sheriff Court after a motion from his lawyer to have the inquiry halted was refused by the sheriff hearing the case.

But, after taking the oath, Mr Clarke was told repeatedly by Sheriff John Beckett QC that he did not have to answer any questions which might incriminate him.

While Mr Clarke did respond to some questions put to him by solicitor general Lesley Thomson, the QC leading the inquiry, he refused to answer almost all of the questions she asked him in the early stages of his evidence – including about the day of the crash itself.

A request from Mr Clarke’s lawyer to have the inquiry halted was refused earlier. Mr Clarke is the last witness to give evidence.

The inquiry has heard Mr Clarke was unconscious behind the wheel of the truck when it veered out of control on Queen Street three days before Christmas, killing six and injuring 15 others.

Erin McQuade (18), and her grandparents Jack Sweeney (68), and Lorraine Sweeney (69), from Dumbarton, West Dunbartonshire, Stephenie Tait (29), and Jacqueline Morton (51), both from Glasgow, and Gillian Ewing (52), from Edinburgh, were all killed as the lorry travelled out of control towards George Square before crashing in to the side of the Millennium Hotel.

The inquiry has heard evidence that Mr Clarke has a history of dizzy spells and fainting which he failed to disclose to the DVLA and on job application forms. This included a blackout at the wheel of a stationary bus in April 2010 when he was a driver with first bus.

There were sobs from a family member as Mr Clarke was led into the witness box. Wearing a suit, he confirmed his name and gave his occupation as an LGV driver.

The solicitor general then asked Mr Clarke to confirm his details and began asking him about his early employment history.

Sighs could be heard from the families when the council worker repeatedly answered with the words: ”I don’t want to answer that question.”

After Mr Clarke answered some basic questions put to him, his lawyer made repeated objections to the sheriff.

The former driver told the court he would answer “just what the sheriff says, my name and age”.

“Do you know that family have been in court every day?” asked Ms Thomson.

“No, I don’t know that,” the witness replied.

Mr Clarke also told the inquiry he did not know about the family circumstances of Ms Morton, Ms Tait and Ms Ewing.

The QC went on: “Do you know that these families have been in court to hear answers?”

Mr Clarke responded: “Well, I would imagine they would want answers, yes.”

Ms Thomson said: “I’m asking you questions because we all want answers to why it happened that day.”

“I understand that,” Mr Clarke replied.

The former driver, who gave his evidence seated, was later asked by the solicitor general: “Do you understand that by choosing not to answer you are putting yourself first?”

He said: “I wouldn’t agree with that.”

The witness was then asked to look at his medical records dating back to June 1976 which listed periods of dizziness and ill-health.

After an interjection by his lawyer, Mr Clarke was reminded again by the sheriff that he does not have to give any answers that could incriminate him.

Before giving evidence, Mr Clarke’s lawyer said that he would no doubt find it “traumatic” having questions put to him about the accident.

Ronnie Clancy QC said: “Mr Clarke should not be expected to have the presence of mind to appreciate the significance of all the questions he is asked.”

Also before evidence, the sheriff asked families to allow Mr Clarke to answer questions, “no matter how emotionally affected” they may be.