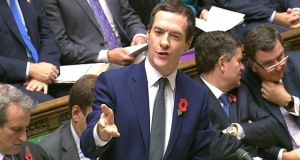 Britain’s chancellor of the exchequer George Osborne speaking in the House of Commons on Tuesday. He said he would carry on with his tax credit reforms. Photograph: PA Wire

A defeat for proposed welfare cuts in Britain’s upper house of parliament was widely seen on Tuesday as a deep blow to chancellor of the exchequer George Osborne, leaving him “isolated” and “humiliated” after he asked the country to live within its means.

Forced to backtrack on cuts to benefits for low-earning families, Mr Osborne’s determination to push through measures critics said would hurt Britain’s most vulnerable people was deemed ill-judged by newspapers and some lawmakers.

He is widely seen as the frontrunner to succeed prime minister David Cameron, but the defeat in the House of Lords on Monday struck at the heart of his attempts to broaden his appeal to blue collar workers and claim the political centre ground.

It also blows a £4.4 billion (€6.1 billion) hole in his plans to wipe out Britain’s deficit – a policy championed by Osborne which helped spur the Conservatives to a resounding victory over the opposition Labour Party at an election in May.

Opposition MPs jumped on the forced U-turn by the minister, who last week said he was “comfortable” with the changes despite the growing criticism. “The chancellor is in denial,” deputy leader of the Scottish National Party, Stewart Hosie, said in parliament.

“Is it not the case . . . that yesterday the 26th of October demonstrated two things: The chancellor has lost his political touch, and his chance of being prime minister has just gone up in a puff of ermine-clad smoke.”

Britain’s biggest selling newspaper, the Sun, an influential supporter of the Conservative Party, splashed “Borne loser” on its front page. It said Mr Osborne had been left isolated after being “forced into a humiliating climbdown on his huge cuts to tax credits after crushing defeats in the House of Lords”.

The upper house broke with long-standing political convention by voting to reject a financial measure. It called on the government to find ways to help those who would be left worse off, such as single parents and the self-employed.

The vote followed weeks of criticism over the cuts, which the independent Institute for Fiscal Studies said would make three million households worse off by, on average, £1,300 a year.

Mr Osborne had said Britain could cut the tax credits because of a higher minimum wage, due to rise to more than £9 an hour by the end of the decade. But critics, including members of his own party, said such increases followed the cuts too slowly.

Earlier this month, Heidi Allen, a Conservative MP, used her first speech to parliament to criticise the pace of the cuts, saying the government was sending “a message to the poorest and most vulnerable in society that we do not care”.

Unbowed, Mr Osborne, often credited with being the political brains behind Mr Cameron’s leadership, said on Tuesday he would carry on with his tax credit reforms to “save the money needed so Britain lives within its means”.

“We remain as determined as ever to build the low tax, low welfare, high wage economy that Britain needs,” he told a rowdy session of parliament.