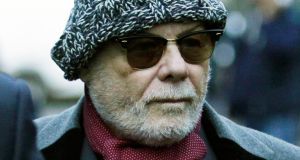 Former pop star Gary Glitter, who has been jailed for 16 years at Southwark Crown Court for a string of historic sex attacks on three schoolgirls. Photograph: Nick Ansell/PA Wire

The 70-year-old, real name Paul Gadd, was sentenced after being found guilty of one count of attempted rape, one count of unlawful sexual intercourse with a girl under 13, and four counts of indecent assault.

Glitter, dressed in a black velvet coat and burgundy scarf, showed no reaction as he was led from the dock after he was sentenced at London’s Southwark Crown Court.

There was standing room only in court as loyal fans of the singer gathered in the public gallery to see him learn his fate.

Before the hearing they had huddled together, poring over a Glitter annual, sharing tales of their fandom.

Sentencing the singer Judge Alistair McCreath said: “I have read the victim impact statements of all three victims. It is clear , in their different ways, they were all profoundly effected by your abuse of them.

“You did all of them real and lasting damage and you did so for no other reason than to obtain sexual gratification for yourself of a wholly improper kind.”

He added: “The offences for which I must pass sentence today took place many years ago at a time when in particular, in respect of one of them, the maximum sentence was considerably lower than that which is now available.”

He earlier said that the guidelines dictated that he must take the current sentencing options into account.

Glitter, from Marylebone, central London, denied the allegations against him.

He was cleared at trial of one count of plying a girl under 13 with alcohol in order to facilitate sexual intercourse, and two further counts of indecent assault.